No visit to Austin is complete without a visit to the Texas State Library and Archives (TSLA).  This state agency is located in the Lorenzo de Zavala State Archives and Library Building at 1201 Brazos Street across the street from the Texas State Capitol.  The Capitol Visitor Parking Garage at 1201 San Jacinto is the best place to park. 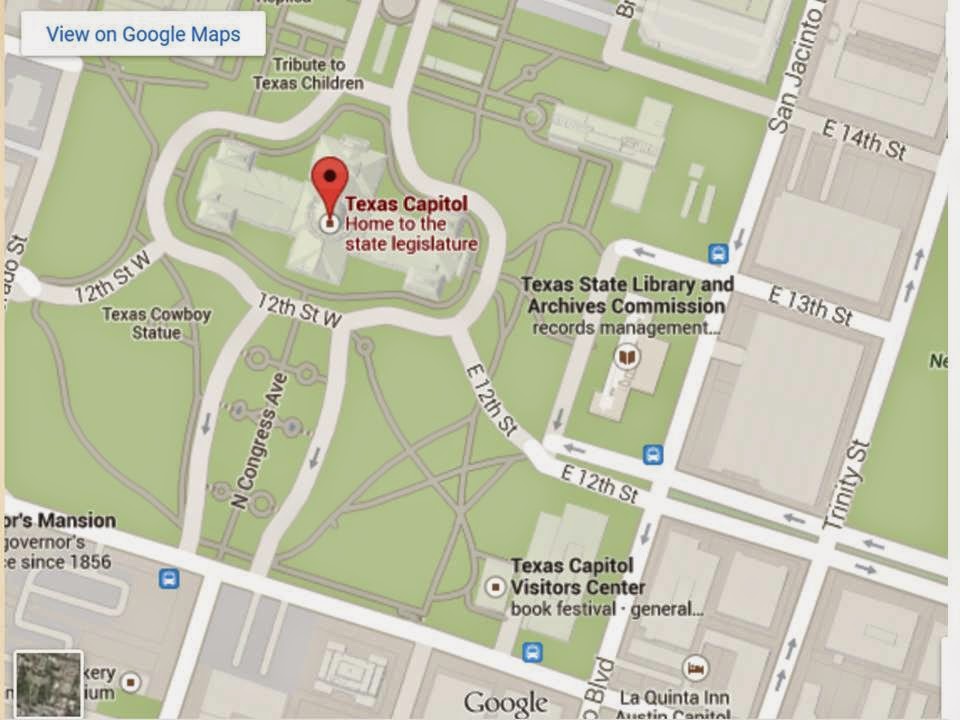 Check in at the front desk and get a visitor badge to access the Texas Family Heritage Research Center, the Reference Library and the Texas State Archives. The Archives Room is on the first floor and the Reference Library and Texas Family Heritage Research Center (TFHRC) are on the second floor.  A reference librarian gave me a tour of the Research Center.  When I asked about African American genealogy resources, the librarian gave me a handout from a workshop that was held on the subject earlier in February for African American History month.


The Genealogy Collection at the TFHRC includes print and microfilm records including print indexes to Texas vital statistics (birth, death, marriage and divorce), city directories, county tax rolls, Federal census records, newspapers on microfilm, family histories and county histories.  Most of their microfilm can be borrowed through interlibrary loan.  In addition, the genealogy research center has several computers with free access to online resources such as Ancestry.com, Family Search.org, Fold 3, Heritage Quest and the Texas collection at Newspaper Archive.  The library is equipped with computers, microfilm printers and book scanners that will save images on your USB drive.  The Reference Library has books from Texas and most U.S. states and some foreign countries in two stack areas.

The search strategy for African Americans in the early Texas records is to look for free blacks or slave owners in the online indexes.  Many blacks served in the Texas State Police during Reconstruction.  State Police pay records have been digitized and are available in the Texas Adjutant General collection. Another collection that includes significant numbers of African American males is the “Voter Registration of 1867.”  The voter records are available on microfilm through interlibrary loan or digital images are available on Ancestry.com.

For anyone interested in African American history in Texas, I recommend you visit the online exhibit entitled “Forever Free.”  These illustrated web pages summarize the history of fifty-two African-American men who served Texas as either state legislative members or Constitutional Convention delegates during the last three decades of the 19th century.   ForeverFree Online Exhibit

Here are some links to other records provided by the Texas State Library of value to African American researchers:

My Dilemma with the Lord of the Manor: UK and Ireland Genealogy

Most of my world travel is virtual reality experienced through a screen.  Downton Abbey took me across the pond last night.  The show portrays a fictional estate in Yorkshire from an actual estate in Hampshire.  My Banford and Nevin maternal ancestors emigrated from the confines of the Colebrook estate in County Fermanagh in Ulster.  My paternal grandmother’s ancestor, James McCrory, left County Monaghan, Ireland, settled in Lancashire, England married an innkeeper’s daughter, Sarah Lee and took her to Pennsylvania.  I have had the good fortune to retrace some of the steps of these ancestors with a visit to Ireland back in 2008.

Our ancestors who emigrated from the United Kingdom and Ireland had an uneasy relationship with the lord of the manor.   Now we marvel and dare I say idolize the grandeur of our former masters.  I presented an overview of my British Isles research techniques to the Bear CreekGenealogical Society on Thursday.  I took a “show of hands” survey and was pleased to see how many of the audience had, English, Irish, and Scottish forebearers.  I was also somewhat amazed that the vast majority of the audience was following Downton Abbey.  Why is this show so popular with Americans ranging from the 1% to the Occupy Movement?  What are the implications for genealogy in America? 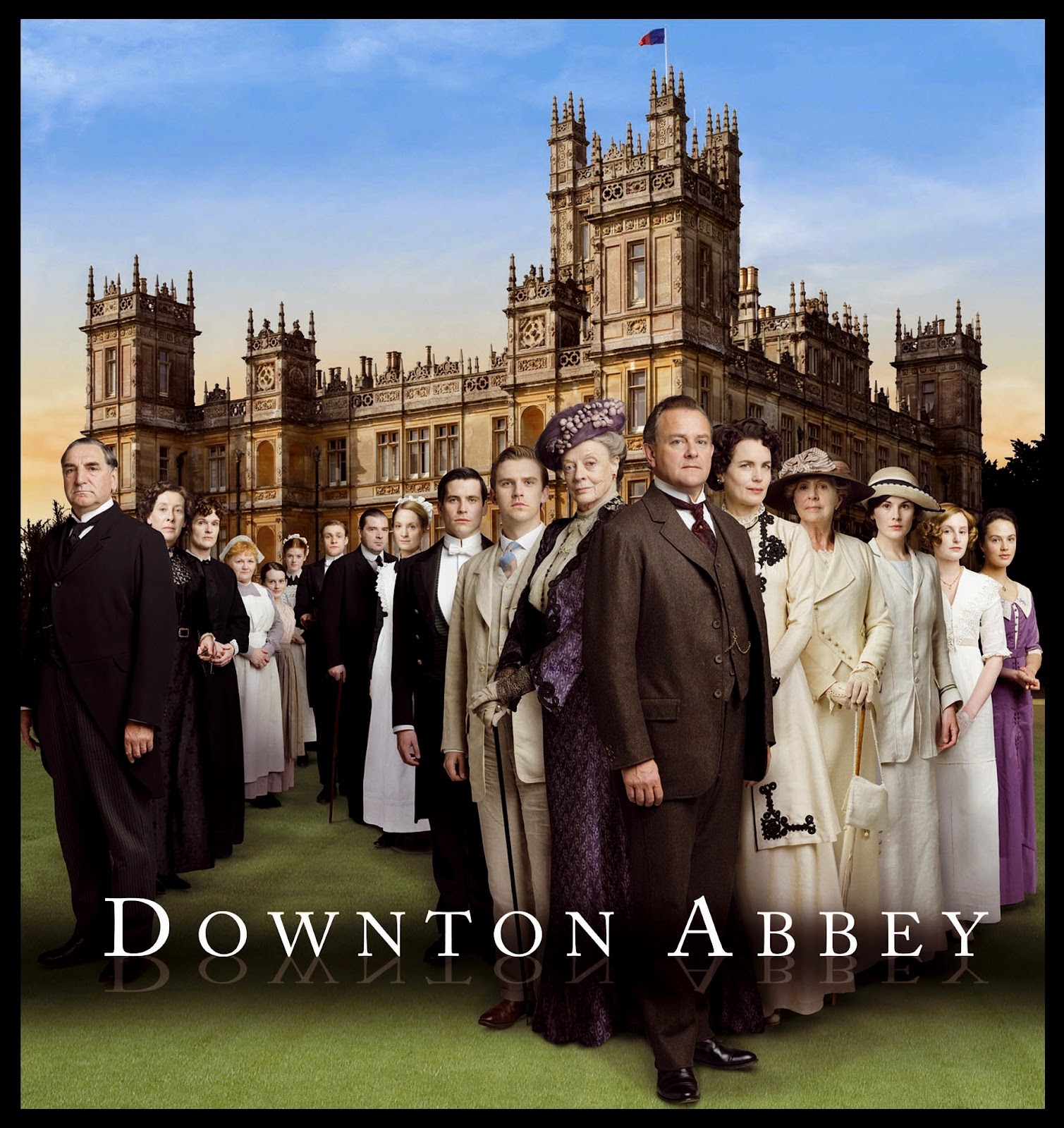 To answer the first question, I recommend a most intriguing article posted by the History News Network at George Mason University.  The article observes that the show features characters that appeal to our deepest American beliefs: “Downton allows people from across the socio-economic and political spectrum to see their values legitimized through the storytelling process.”  And of course that castle and those costumes are a great escape from the routine of our urban and suburban lives.

As a genealogist, I love the fact that Downton Abbey profiles the lives of the gentry, the tenant farmers and the servants.  We can at least imagine what it was like for our ancestors to live in this tiered society that was manifested throughout the British Empire.  Perhaps we can imagine why our ancestors supported a revolution in the American colonies.  But the thing I love most about the lords of the manors are that they kept good records.

I lured my wife to accompany me to Ireland with the promise of touring the Irish countryside.  She was not surprised to learn that there was a family farm, church or cemetery at the end of every road.   I also promised that we would see tourist attractions like the Book of Kells and the Giants Causeway.  Being the ever patient wife of a genealogist, she shared some of my excitement when the archivists from the Public Record Office of Northern Ireland (PRONI) brought us the leases and survey maps in the form of the original hand drafted documents on sheepskin.  We never made it to the Giants Causeway because of the five days spent at PRONI.  We did make it to the bar at the top of the Dublin observation tower at the Guiness Brewery and we came home with some great pictures and souvenirs!

On Saturday, I had the pleasure of attending a series of three seminars presented by Franklin Carter Smith.  Mr. Smith is currently employed as a librarian at the Clayton Library Center for Genealogical Research, a branch of the Houston Public Library.  Mr. Smith is co-author of A Genealogist's Guide to Discovering Your African-AmericanAncestors.  This book provides easy, step-by-step instruction for researching slave and free black ancestors pre- and post-Civil War.  Mr. Smith excerpted examples from his book for the three seminars. 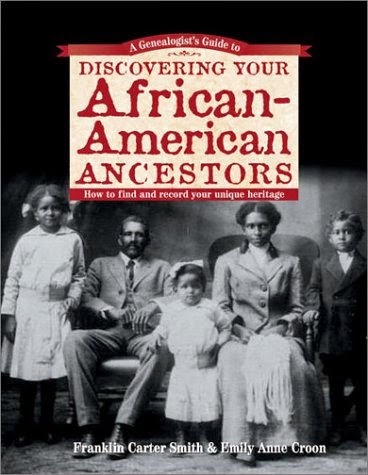 The first seminar was entitled “Tips and Strategies for Researching Post Civil War African-American Ancestors.”  Some of the points that I found especially illuminating were


The third seminar focused on “Searching for Slave Ancestors in Slaveholder Documents.”  Mr. Smith described a variety of search strategies for finding records naming slaves.  The records are divided into two classes: 1) legal and public domain records (i.e. records filed at the county courthouse) or 2) business/personal records and documents including plantation and business records, family Bibles recording slave births, diaries, letters and other personal or family papers.  The legal records can be found in county courthouses, state archives, genealogy or historical societies or they can be found on microfilm through local Family History Centers.  Many of these microfilms are now being digitized and made available at FamilySearch.org.  Some are indexed.  Others require painstaking browsing.  Examples of the types of Slaveholder documents that must be searched include:

I own an autographed copy of A Genealogist's Guide toDiscovering Your African-American Ancestors and I highly recommend it as a reference guide.

Genealogy and fishing have a lot in common.  They both require lots of patience.  They both have lots of tools that facilitate the “big catch”.

I wrote last week about Newspapers.com.  I showed examples of how to make clippings and attach them to an ancestor profile on Ancestry.com.  I was using the surnames “Banford” and “Mayne” to search in the Cincinnati newspapers at Newspapers.com.  When you are fishing you can use a pole, a spear or a net.  When you research newspapers online using keywords it can be like using a spear or a net when you are fishing.

For example, the spear approach is to use the full name in quotation marks such as “George Banford”.  The net approach would be to use just the surname “Banford” to find all instances of matches for persons named Banford.  If you want to use a bigger net then you might start using the surnames of the relatives, friends, associates and neighbors.

For example, George Banford was married to Mary Nevin.  Two of Mary’s sisters, Jane Nevin and Magdalene Nevin were both married to Stephen J. Ashworth in Schuyler County, Missouri.  So Ashworth is a name that I also want to search to learn more about George and Mary Banford.  The State Historical Society of Missouri has made many Missouri newspapers from the post Civil War period available at their website.  I began by searching the Schuyler County paper, the Lancaster Excelsior at the Historical Society Website.  I found this very intriguing article about George and Mary Banford (nee Nevin) that also mentions George’s mother-in-law, Nancy Navin (spelled Nevin in other records) and his brother and sister-in-law, Stephen J. Ashworth and Magdalene Ashworth (nee Nevin).

This article adds an interesting footnote to the narrative of the life of George Banford.  Born in County Fermanagh, Ireland in 1828, he immigrated to America in 1853 according to the 1900 census.  He settled in Schuyler County, Missouri. On 31 March 1859, he married Mary Nevin in Schuyler County.  In 1860 he was enumerated in the U.S. Federal Census with his new wife and they were residing next door to his in-laws,  Thomas and Ann (Nancy) Nevin.  Some time after the outbreak of the Civil War, he left Schuyler County and relocated near Cincinnati, Ohio.

Why George and Mary Banford left Missouri is subject to speculation.  The following was compiled from Caywood's 1888 History of Adair, Putnam, Sullivan & Schuyler Counties:

"The Civil War caused many hardships for Schuyler Countians. Although Missouri was a free state, enlistments in Schuyler County were almost evenly divided between Union and Confederate forces. Neighbor no longer trusted neighbor, and families were divided in loyalties. Bushwhackings and skirmishes occurred throughout the area. Some families left, unable to live under such stress."

Apparently George and Mary Banford left Schuyler County without disposing of all of their real estate as indicated by the clipping from the Lancaster Excelsior.

Another intriguing article was found by searching for Ashworth in the Adair County, Missouri newspaper.  The Historical Society of Missouri website redirected me to the Chronicling of America website.

The John Ashworth mentioned above is probably John Davis Ashworth 1861-1918, son of Stephen J. Ashworth and his first wife, Jane Anne Nevin.  In 1890 at the time of his marriage, John Ashworth was residing at Novinger, Adair County, Missouri.  But who is Mr. Banford?  It is probably one of the sons of George Banford.  Tom Banford was about the same age but it also could have been George or one of his other sons, Joseph or William.

I found several more articles about the Ashworth cousins by "casting a wider net."  I was also happy to "spear" the above article about a most interesting real estate transaction.  Happy trails until next time!

Posted by Nick Cimino at 3:17 PM No comments: