James Bamford. 1796–1882 My 4th great uncle
BIRTH ABT 1796 •
DEATH OCT/DEC 1882 • Lisnaskea Reg Dist, Fermanagh, Ireland
!BIRTH: about 1796; Estimated birth year from death record below.  He resided in Creagh, Agahavea Parish, County Fermanagh, Ireland in 1834 but his birthplace is unknown.  James Banford/Bamford was probably not the son of Samuel Bamford of Derryheely. The Brooke Estate Deed for Samuel Bamford describes his oldest son as John Bamford aged 10 in 1807.  It is of course possible that John Bamford was older than 10 but the deed also describes William Bamford age eight as the second son so James would have to have been born after 1809 to be the son of Samuel Bamford of Derryheely unless both John and William were actually older than ten and eight in 1809.
!BIOGRAPHY: To Essie  Bamford O'Neill from Della Cooke Crawford        Dated 1-8-1962 Your great grandfather’s name was James. He had a large family. His wife’s name was Margaret Emerson. His daughter's name was Jane who married Galbraith Moffatt. Mary who became Mrs. James Crawford lived on the homestead in Crieve, raised her family there and I think there was a Margaret who was drowned coming out here. Her son’s names were William, James, Robert, and Edward. William, Robert and Edward married three sisters named Murphy (Not RC`s). Your great grandmother lived with your great aunt Mary Crawford and died with her at the old home stead in Crieve, your great grand father also and were all buried in Colebrook churchyard.

Posted by Nick Cimino at 3:01 PM No comments:

Sampson Looney- with yDNA He Is Fatherless No More

One of my recent projects was to flesh out the family tree for my friends, Jan and Ron Looney of Walnut Creek, California. Jan created a tree on Ancestry.com called the Janet Combes Family Tree and shared the tree with me making me an editor.  I was able to find ancestors for both Ron and Jan out at least five generations on most lines.

The Looney line is shown in the pedigree chart below beginning with Ron's father: 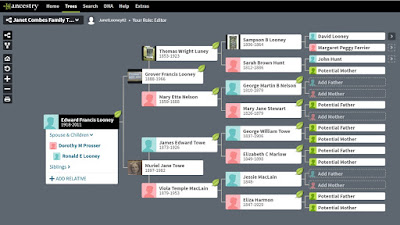 Ron had his y-DNA tested through Family Tree DNA which enabled the administrator of the Looney DNA project to add three more generations to Ron's pedigree.  His end of line prior to the DNA test was Sampson Looney: 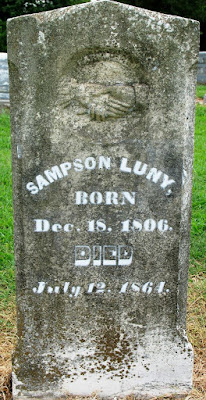 As you can see in the above image from FindaGrave.com, the gravestone is the primary source for the birth and death dates. Note that there is an alternate spelling on this gravestone.  There are many variations in the records:

I found an Ancestry.com Message Board on the Looney family with a posting by one of the Administrators of the Looney Family DNA Project:

As one of the Admin for the Looney DNA Project I have been asked for assistance in trying to figure out who Sampson Looney's parents were. Based on a single Y-DNA test of one descendant of Sampson Looney, we discovered that his Y-DNA match most closely matches the Y-DNA of several descendants of the John 2 Looney family line.

There is one DNA marker in particular that points in this direction. So far only the John 2 Looney descendants possess this one marker at the value of 11. From what we know of the John 2 Looney family line, it seems that John's son, David Luney/Looney is the most probable ancestor who could be the father for Sampson Looney. David Looney was granted land by his father in Botetourt County, VA about 1808 but by 1810 David Looney is gone from the Botetourt County, VA records.


I contacted the person who posted this message through his Ancestry.com user name: LooneyMcBride.  He replied the same day with some background and sources for his research.

Hi Nick, My name is Larry W Johnson and I live in Grapevine, TX half way between Dallas and Fort Worth. I have been researching the Looney family for a lot of years and a lot of my research is built on prior research done by Leroy W Tilton and the lady who coordinated and typed the Looney Family Manuscripts, ca 1963, Miss Elizabeth Looney of Washington, D.C. Of course there were a multitude of early Looney family researchers who coordinated their research with Mr. Tilton and Miss Looney. Tilton stopped his research about 1963 because of age and Miss Looney continued hers until her death in August 2001.

I also found an excellent summary of the life of Sampson Looney posted by an Ancestry.com user.  I took the liberty of reorganizing the information in chronological order:

Surnames: Looney, Luny, Stewart
MESSAGE POST HAS BEEN EDITED TO PLACE EVERYTHING IN CHRONOLOGICAL ORDER BY NICK CIMINO, SEP 2018

1806- Sampson B. (Sam) LOONEY was born on December 18, 1806 in Grainger County, Tennessee. But, NO ONE has cracked the puzzle! Who were Sampson's parents? [UNTIL NOW!] Tradition has it that Sampson's father died young and the mother married 2) Standifer and 3) Stewart. {That theory doesn't work since Laban Stewart was born 1803 and Sampson Looney was born 1806 so marriage order would be Stewart, Looney then Standifer} [MR. JOHNSON QUESTIONS THE SOURCE FOR THE BIRTHPLACE OF SAMPSON.]Is Labon,Laban Stewart half brother of Sampson Looney? Laban Stewart's grand daughter Mary Etta Nelson married Thomas Looney, youngest son of Sampson and Sarah. Sampson's parents would have been born about 1785 +or- 5.

1830- Sampson Looney was married to Sarah Brown HUNT (daughter of John T. HUNT) on August 30, 1830 in Morgan County, Illinois. Illinois Marriages, 1790-1860, online has the date as 31 Aug. 1830, but the actual certificate states the date as 30 August 1830. I have a copy. The application is made by William Rogers. John Hunt made a statement to the county clerk: 'Sir this is to inform you that you may consider yourself safe in issuing license to Samson Looney to marry my daughter. Signed by John (x) Hunt. This statement was witnessed by John Profe or Grofe.I have a copy of a note from John Hunt giving Sarah permission to marry. There are many Hunts in Clairborne Tennessee, for example Thompson Hunt in Claiborne County, Tennessee in 1850.

1832-1833- He was in 1832 in Barry County, Missouri. By 1832, Sampson and Sarah and first child, Caroline, settled in the section of Crawford County which would become Greene County Missouri in 1833. He appeared on the census in 1833 in Greene County, Missouri. No Township Listed.The couple settled in the Mount Pleasant, Barry County, Missouri area in 1832. Their second child was the first white baby born in Barry County. Later, The census of 1840, 1850 and 1860 show Sarah with her husband Sampson.There is a paragraph about E. M. Looney on page 206 from History of Lawrence County, Missouri which includes: "His grandfather was a native of Tennessee but came to Missouri in 1833 and settled on what is now known as the "Baumgartner Farm." He was an Indian trader and had many dealing with the various tribes with all of whom, by reason of his fair dealing, he was on friendly terms. He has long since crossed over the great divide." {Do not know publish date of book.The date is after 1930}.Sampson was enumerated on the 1833 Greene County Tax list: 2 horses value 60, 2 cattle value 20, one pole 37 1/2, Total value $80, Total Tax 71 2/8.

1832-1845-Sampson preempted land near Prewett's Creek, later known as Clear Creek, in section 30, Twp. 26, Range 28. Section 30 was also the home of William Capps, whose home was the place of the first meeting of the officers of Barry County when it was established in 1835. The new county seat was known as Mount Pleasant.

1840-He appeared on the census in 1840 in Mount Pleasant Township, Barry County, Missouri.

1845- the area where they lived became Lawrence County.

1864- DEATH OF SAMPSON LOONEY- Sampson died on July 12, 1864 in Pierce City, Lawrence County, Missouri.
There is a STORY that Walter L. Looney told her that Sampson was killed by his son James Washington Looney. J W Looney lived next door to Sampson. Sampson was a blacksmith. He was sitting in a rocker with his Bible in his lap when he was shot by his son. Apparently Sampson did not agree with the war.Another STORY states Sampson died at the hands of bushwhackers, land rich, without a will. According to the Probate Court of Lawrence County the final settlement was 4 Feb 1870.

1880- Sarah Looney appeared on the census in 1880 in Pierce City, Lawrence County, Missouri. 1880 Census: Sarah is living with daughter Annie and her husband Rubin Chapell and their 4 children. Sarah Looney is a widow. Next door is son James Looney. The following door is son Thomas Looney.

Mr. Johnson closed his reply to me with the following invitation:

If any of your readers with Looney ancestry who would like to contact me with questions, comments or feedback they can do so at: Johnson.Oliver@Verizon.net I have also set up a "Looney Family Group" on Facebook for Looney descendants who would like to meet and communicate with their long lost Looney cousins.


To view the pedigree of Sampson Looney in the Ron and Jan Looney Family Tree AKA Janet Combes Family Tree use the following link:

Also check out the gallery as there are about a dozen documents and images attached.