Memorial Day seems like a most appropriate time to share the concluding message of the Uravan story.  Last week we introduced Vesta Price Fitzpatrick as the author of Uravan.  This week we skip to the ending of this poignant story of life on the home front during World War II.  At the end of this blog post, you will find a link to a scan of the last 26 pages of Uravan. 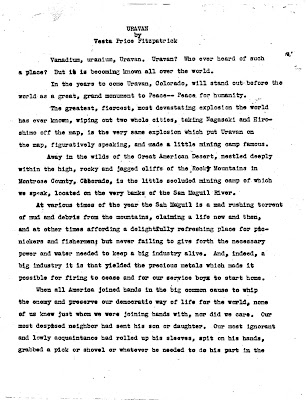 Vesta provides many anecdotes throughout the entire narrative.  This last section begins on page 118 of her typescript with a story about lost hikers.  It includes her observations on the water supply, health & safety, the commissary, the black market and kindness to a new family.

She then begins a very touching conclusion by taking "A GLANCE BACKWARD."  This section tells the story of her happy rural life in Collbran, Colorado.  She includes a tribute to her husband. Collbran was the place where all of her children were born and played on the haystacks.   She describes simple pleasures of parties and picnics, gardens and lawns that become ball fields of a dreamy peaceful existence.  But things were about to change:

"Little did anyone partaking of those eventful occasions, guess that it would be but a few short years when those very youngsters would be living in a world of war and become cannon-fodder for vicious selfish fiends...They were uniting stronger than ever. This new battle would be hard but they could and would win it. Some stood with hands over hearts and repeated the pledge that made them a part of the greatest armed forces of all history.  Others took up various instruments and equipment for production and sent from their hands and minds the most home front backing the world has ever known... they'gave that others might receive, gave their lives that peace might reign and the world be made a better place for posterity."


Vesta describes the news from the Battle of the Bulge:

"The news broadcast, in its horror, gave me courage, a fuller realization of how very much we home front workers meant to our boys on the battle front. The hospitals, the air forces, the navy, the army, wherever our boys served, needed us and our production."


The death of a president:

"people were about to give up but our president had never given up--until death--and his people could not.  They must carry on to the finish, keep the peace that was bound to come..."


V-E Day was joyous but clouded by the terror of Bataan: "Something drastic had to be done..."

The home front workers of Uravan became central to the struggle...

I hope you will take the time this Memorial Day to read the conclusion of Uravan.  Furthermore, I hope you will support and encourage us to get this book published.

Here is the link to the scan of the concluding pages: