The Descendants of Sebastiano Cimino and Carmela Grasso


Back in 1992, I started a quest to learn the names of the descendants of Sebastiano Cimino and Carmela Grasso.  These were the parents that were left behind by my great grandfather, Antonino Cimino when he left Carlentini, Sicily for a new life in America in the first decade of the 20th century. With many starts and stops over the last 27 years, I have accumulated several names. But now with a trip to Carlentini planned in 2020, I have a new urgency and have achieved new successes.

Here is a translation of the letter that I received from the City of Carlentini back in 1992. 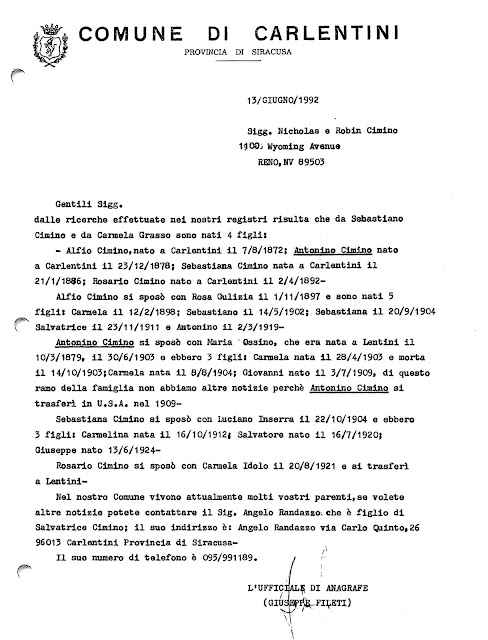 From the research carried out in our registers it appears that Sebastiano Cimino and Carmela Grasso had 4 children:

[my great grandfather] Antonino Cimino married Maria Ossino, who was born in Lentini 10 March 1879. They were married 30 June 1903 and they had 3 children born [in Carlentini] Carmela was born 28 April 1903 and died 14 October 1903; [in the Sicilian tradition the next child was also named Carmela to carry forward the name of the paternal grandmother. The second...] Carmela was born  8 August 1904; Giovanni born  3 July 1909, of this branch of the family we have no other news because Antonino Cimino transferred to the U.S.A. about 1909- [The Carlentini official had no record of the fact that my grandfather, Sebastiano Cimino was born in Lentini in 1906.]

In our City there are currently living many of your relatives, if you wish you can also contact  Mr. Angelo Randazzo who is the son of Salvatrice Cimino; His address is: Angelo Randazzo via Carlo Quinto, 26 96013 Car1entini Province of Syracuse-


Here is a summary of what I know about my second great grandparents who remained in Carlentini.

Sebastiano Cimino was born 28 December 1841 in Carlentini, Sicily and died there 2 April 1917. His father, Alfio Cimino, was 64 and his mother, Anna Gulizia, was 46 when he was born so there were most likely previous marriages for both of them. He married Carmela Grasso, daughter of Alfio Grasso and Giuseppa Tomaselli, on November 2, 1871, in his hometown of Carlentini. They had six children in 19 years.

The death record says that Sebastiano Cimino lived on the Via del Leone in Carlentini. His occupation was contadino which means peasant farmer. Carlentini is mainly an agricultural center and produces citrus fruits, olives and cereals. There are also cow, pig and sheep farms.

It must have been difficult for Sebastiano Cimino and his wife Carmela to see two of his children depart for the United States and never return. But they had four children that remained in Carlentini. There were four weddings to celebrate and many grandchildren would also fill their lives with joy.

I did correspond with Angelo Randazzo for several years and he put me in touch with his uncle Antonino Cimino that lived in Milan.  When I moved to Texas in 2010, I was able to get in touch with the daughter of Angelo Randazzo by email. Recently, I have discovered that she and her sister and brother are all on Facebook and we have been corresponding in anticipation of my visit to Carlentini in 2020. We have been sharing pictures of our grandparents and I have been recording all of this information in my family trees on Ancestry.com and FamilySearch.org.

If you have accounts on either of those websites, you can view my Sicilian ancestors at the following links:

Here is the link to my family tree on Ancestry.com: https://www.ancestry.com/family-tree/tree/31602110/family/pedigree

Here is the link to the family tree on Family Search: https://www.familysearch.org/tree/pedigree/landscape/LXMW-56X


I highly encourage you to sign up for a free account at FamilySearch.org if you have not already done so.  This site is particularly helpful for those of us with ancestors outside the U.S. which I think is just about all of us.

I look forward to my Sicilian family reunion in 2020. Vito and Michael Corleone had brass bands waiting for them in the Godfather movies.  I do not expect to have the whole town come out to greet me but the list of my Sicilian Facebook friends and relatives is growing quickly!

Posted by Nick Cimino at 8:06 AM No comments: