A strange confluence of events has occurred over the last week regarding the Black Elephant Saloon. I have blogged before about the "Mysterious Bob Sloan: His Journey from Slavery to Freedom and Beyond."  I used my research on Bob Sloan as the basis for a presentation on Saturday, April 9, 2016 to the Houston Chapter of the Afro-American Genealogical and Historical Society.  Newspaper research at the Portal to Texas History was one of the techniques discussed.  This 1892 advertisement from the Brenham Banner shows that Bob Sloan was the co-owner of the Black Elephant Saloon in Brenham, Texas.

Later in the week, we watched the online full episode of  the TLC show "Who Do You Think You Are" featuring the ancestors of Aisha Tyler.   Her ancestor, Hugh B. Hancock owned a saloon in Austin, Texas called the "Black Elephant."  The name of the saloon has an obvious political overtone as most blacks were members of the "party of Lincoln" in the 19th century.

Social Historian, Christine Sismondo, revealed to Ms. Tyler that "politics happened in almost every saloon."  Segregated saloons served as a safe refuge for the discussion of current events.


Curiosity led me to wonder if there were any more saloons with the moniker "Black Elephant." Returning to the Portal to Texas History, a search of the exact phrase "Black Elephant Saloon" found 23 matches.  The first result was the application materials submitted to the Texas Historical Commission requesting a historic marker for the Hugh B. Hancock House, in Austin, Texas.  The materials include the inscription text of the marker, original application, narrative, and photographs. Ms. Tyler might find that document about her ancestor of interest.

As I scrolled down the list, there was newspaper evidence of Black Elephant saloons in Brenham, Austin, San Antonio, Fort Worth, El Paso and Houston.  Even Fulda and Hunter had businesses with the name Black Elephant.  There were so many "Black Elephants" that it seemed that someone had developed a franchise for the "brand."

A Google search revealed that the material culture from these saloons are valuable and rare. The "Black Elephant" collectibles included an old bottle, a trade token and a letter.

Here are some of the articles and images that I found that referenced Black Elephant:


The letterhead shows P. Magadieu as Proprietor. Dealer in Wines, Liquors and Cigars; "Old Kentucky Bourbon Whisky a Specialty".  The saloon was located at 137 South Flores, corner West Nueva, one block south of Military Plaza. The letter is signed by Paul Magadieu, the Proprietor of the saloon. The letter is written in the French language which indicates that the proprietor of this saloon was white.  Did he cater to African Americans?

Here is another newspaper article that references the term "black elephant" as a metaphor for black suffrage and the black political office holders that resulted in Washington, D.C. 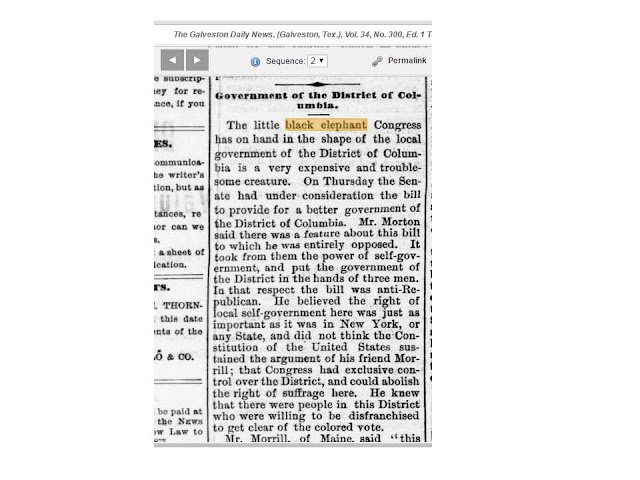 It would be interesting to find out if African American saloons in other states besides Texas used the name "Black Elephant."  The Oklahoma newspaper site shows the term used in several articles in Guthrie, Oklahoma.

The terminology in this article leads me to believe that there may have been a trade sign with an elephant symbol in front of the "Black Elephant" in Guthrie.

The bottom line is that many businesses in at least two states were known as the "Black Elephant." The saloon in Fort Worth was established in 1885 by West Mayweather, a black saloon keeper. He opened the Black Elephant on the opposite end of Main Street from the White Elephant which was founded a year earlier. Richard Selcer on page 276 of his book "A History of Fort Worth in Black & White," states that "whites could patronize the Black Elephant but never vice versa."   Much more needs to be written about the history of these early businesses in the African American communities.
Posted by Nick Cimino at 2:09 PM