When you are researching ancestors that died before the 1850 census, you are presented with an ancestor puzzle with many missing pieces.  Prior to 1850, our puzzle pieces include census, tax lists, land, probate and host of other records that often get ignored.  Such is the case with two of my ancestors, William Newman and Moses Nelson:

My intent was to research William Newman but I kept finding Moses Nelson in the same records.  Their names are both found in the "Ne" portion of the indexes.  They appear to be contemporaries but not necessarily associates.  Their descendants were joined together by the marriage of William Thomas Newman and Louisa Joyce Fowler, three generations later as shown in the pedigree for their daughter and my great grandmother, Julia Ann Newman: 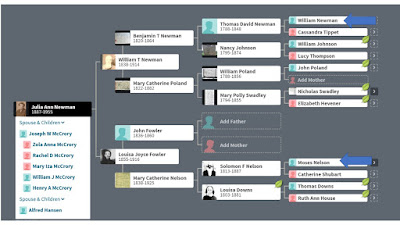 I was interested in finding information about William Newman because I was intrigued by the fact that he freed his slaves in his will.  Here is what I found:

The 1790 census shows a William Newman in Charles County, Maryland:

This census would indicate that William and Cassandra had two children prior to 1790.  This is slightly inconsistent with the known family information which shows three children born prior to 1790:

By 1800 the William Newman Household had grown considerably. We appear to be missing one child in our records as there are only two children shown as born between 1790 and 1800:

We have knowledge of three daughters and two sons but as shown below there was another boy under 10 recorded in the 1800 census. In addition there is a white male 45 and over that is a subject of speculation.  There are two females 10 through  15 shown in the 1800 census but Eleanor Newman would have been about 17 and Sophia Newman would have been about 13 which is a slight mismatch.

The 1810 census shows the following:

The earliest event that I have found so far involving the Newmans in Kentucky was 7 Aug 1813 in Bourbon County, Kentucky, Thomas David Newman was married to Nancy Johnson.

In 1814 the marriage of Sarah Newman to David Wilson occurred on 16 Jun 1814 in Bourbon County, Kentucky, USA.

Agusta Newman and Melinda Sledd were married in Bourbon County on the 3rd of November of 1815.

his William x Newman Seal
mark Witness Hezekiah B Hon John Beck
her Mary ann x Beck
Mark Bath County December Court 18th DECEMBER 1840 This Instrument of writing purporting to be the last will and Testament of William Newman Deceased was produced and proven in open court by the oaths of John Beck and affionation of Hezekiah B. Hon witnessess thereto subscribed and ordered to be recorded whereupon the same hath been duly admited to . The will of William Newman dated 1836 Nicholas Co. Ky. He lists the following heirs: Thomas, Eleanor Fugate, Sophia Harden, Augusta (son), Sarah Willson, Sarah's husband David as executor.

Research at FamilySearch.org and at the Family History Library in Salt Lake City has failed to reveal any further references to William Newman in Bourbon, Nicholas or Bath counties.

I composed emails to my colleagues in the Association of Professional Genealogists and I was especially pleased to receive the following response:

Cynthia Maharrey has provided me with some good suggestions which might help me find what happened to the slaves that were freed by William Newman. Wish me luck!

Here is the profile for Cynthia Maharrey at the the Association of Professional Genealogists: