New hints on my Ancestry tree led me to some interesting documents on Fold3.com for my grandfather and his brothers. First let me show you some pictures of the people in the documents.

I do notice that Grandpa Dick is holding his cigar. I have very vivid memories of his ashtray next to his recliner in the family room. I believe that he smoked Roi Tan cigars. We had several of his cigar boxes for trinkets over the years but I do not have any today.

Here is an image of an ashtray that was similar to the one that Grandpa Dick had next to his recliner: 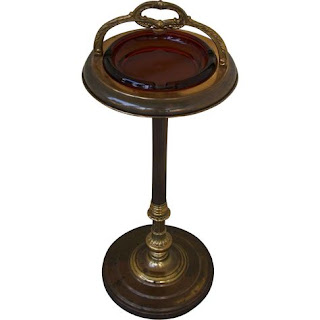 Carroll Stewart was a neighbor on 17th Street and I believe he is the man with his hand on Fred's shoulder in the picture above.  Carroll and his girl friend Ollie and Fred and his girl friend Shirley stole away from Sioux City and got married on the same night in Shirley's hometown of Pender, Nebraska.


All of the people in the above photo are Ciminos except where the last name is noted. Standing: Austin McCrory, Sophie, Christena "Tena", Shirley, Ann, Rose Cimino Ferraguti, and Jimmy McCrory. Kneeling: Antonino "Tony" or "Nonnu", Fred, Betty, Tony, John, and Rose's husband, Sam Ferraguti. At one point, I thought this was in Sacramento but it may be in South Sioux City.

So here are the draft cards for the Cimino brothers:

Uncle Fred worked at Armour Meat Packing Company in 1940. Fred was the only one that did not live on 17th Street in 1940.

This is the first record that I have seen with Uncle John's middle name.  I had him as John J. Cimino until now.
John was the shortest and the lightest of the four brothers at 5'4" and 125 pounds.

Uncle Sam was in the middle with a height of 5'6". Sam is the only brother not shown in any of the pictures above so here are some pictures of him:
The inscription on the back of this picture says "Josie, the dog is the one with his mouth open, Sam". Josie is Sam's sister.
The Italian spelling of this sister's name was Carmela Cimino Defazio. She was the second Carmela born to Tony and Mary Cimino in Sicily. They were obligated to name their first daughter after Tony's mother, Carmela Grasso. Carmela came over on the boat in 1911 with her mother, Maria Ossino, my Grandpa Dick (Sebastiano) and Uncle John (Giovanni) but died in childbirth in 1920. Her grave is in the Marian section of the Calvary Cemetery in Sioux City, Iowa. Carmela's husband was Pasquale "Pete" Defazio. His second wife, Mary Pironaggi, his mother and several other family members are buried in this same family plot.

As I was adding the draft cards to Uncle Fred's profile on Ancestry.com, I noticed that he had a hint for an Iowa Delayed Birth Certificate.  This was a pretty interesting document as it was a 1942 affidavit filed by his father, Tony Cimino and signed with an X.  Again we see creative spelling as the mother was Maria Ossino not "Uosino." I guess you have to sympathize with the record officials trying to understand the broken English of our Italian immigrant ancestor.

Haley Aguirre of the Sioux City Museum gave me some information about the Ciminos and the packing houses:


In the 1940 city directory for Ciminos. I see the three brothers you mentioned – Dick, Fred, and John – as butchers at Armour. I also see two more, Sam and Sophia [John's wife], who work at Cudahy’s, another city packing plant. All are shown as residents of South Sioux City. I managed to get my hands on a South Sioux City directory, but the earliest I have is 1957. There John and Sophie Cimino live at 402 W. 15th, and Tony and Christina Cimino live at 618 W. 17th.  John is employed at Armour.

Ms. Aquirre also sent me some images of the Armour plant. The first is from the early 1920s, and the second is from right around 1940, when the Cimino brothers would have been working there.


The uncanny coincidence in all of this is that Haley Aquirre is related to the DeFazio family.  Her husband's grandfather is Gary Aguirre. Gary's father was a Mexican immigrant named Luciano Aguirre. Gary's mother was Rose Frances DeFazio. Rose's parents were Pasquale "Pete" DeFazio and his second wife, Mary Pironaggi.

Sioux City did not have a very high concentration of Italian immigrants, at least in comparison to other parts of the Midwest like Chicago. The neighborhood with the largest concentration of Italians was what we now call the East Bottoms, so called because it was on the east side of the railroad tracks and the Floyd River, in the river bottoms. The people who lived there at the time never called it “bottoms,” they actually resented the name and its negative connotation. They called it “east side.”

Regardless, the main streets over there were 7th Street. You’ll see it referred to as East 7th, to notate that they’re talking about the east side of 7th, the portion across the river from downtown. 7th runs east-west, the major north-south streets were Morgan and Steuben. So that first address you gave me for Anthony Cimino, 614 Steuben, was in the East Bottoms. He surely would have known that large Italian community living there.

People in the East Bottoms primarily worked in factories, railroads, and the stockyards, all of which were close by. The Community House was down there, a social service agency that particularly looked after Sioux City’s immigrant populations. It offered English classes, trade apprenticeships, day-care services for children with two working parents, and more services that I could ever name here. The director of the Community House was a woman named Mary Treglia, an Italian immigrant. You can read more about her story and the Community House here: http://siouxcityhistory.org/notable-people/36-mary-treglia-and-the-mary-treglia-community-house.

The Bottoms unfortunately are no longer there. They were eradicated in the 1950s and early 1960s when the Floyd River Flood Control Project re-routed the river right through the neighborhood. The Community House was moved to the Northside, where it sits today, and residents of the East Bottoms were forced elsewhere. Many moved to Sioux City’s Westside, which also had a working-class population. West 7th Street had long been a major business district for immigrants of all kinds. I’m not surprised to see Anthony Cimino living there, either.

Gary [her husband's grandfather] also told me stories about the East Bottoms. He grew up at 8th & Steuben Streets. The door to every house was always open. Anyone in the neighborhood could walk into any house, sit at the table and be served a meal. Adults could sit and play cards between shifts of work. Children would play by the railroad tracks, and sometimes they were lucky enough to see the circus train come into town.

Many DeFazios worked at the Community House when they could and knew Mary Treglia well. Gary was even pallbearer at her funeral. He also mentioned that all the Italians that he knew of living there were Catholic, and members of the Enunciation Church in the Bottoms. Therefore, the Diocese of Sioux City may have more information for you: https://scdiocese.org/

I was stunned to get so much information about the Italians of Sioux City and even more amazed that Haley and I were connected through a family relationship.

Here are the vital details of all of the Cimino siblings mentioned above:

Antonino and Maria had the following children:

Rose married Salvatore Silvio "Sam" Ferraguti  son of Verardo Ferraguti and Elvira Silvia Settini on 18 Jun 1937 in Papillion, Sarpy, Nebraska. Salvatore was born on 1 May 1918 in Nebraska. He died on 2 Nov 2003 in Omaha, Douglas, Nebraska.

As you can imagine there are dozens of cousins descended from these Cimino siblings spread throughout the Midwest and the West coast with a few right here in Texas.

Happy Trails until we meet again!