From Lentini to Omaha: She Chose a Happy Life 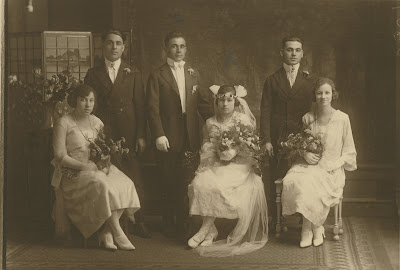 1921 Wedding of Mariano Santo and Giuseppa Ossino in Omaha, Nebraska

montesrule originally shared this to Ancestry.com on 31 Dec 2017

Thanks to Debra Santo, Maria Rita Barretta and Giusy Sciacca, we have another wonderful immigrant story to tell.

Giuseppa Ossino, also known as Josephine Santo, was born on March 1, 1896, in Lentini, Siracusa, Italy, her father, Alfio Ossino, was 31, and her mother, Concetta Maddalena, was 25. She married Mariano Santo in May 1921 in Omaha, Nebraska. They had five children in 12 years. She died in August 1984 in Omaha, Nebraska, at the age of 88, and was buried there.  Debra Santo is the granddaughter of Josephine and Mariano.  She had the opportunity to meet several relatives while she was in Lentini.  Maria Rita Barretta was especially helpful to Debra.

Deb's grandfather, Mariano Santo, had a niece, Turrida Antico, that had written to Josephine Santo in 1981, asking how she got to America.  Giuseppa wrote back to the niece and provided this fantastic narrative of her choice to come to America and her courtship with Mariano.  Turrida (Salvatrice) Antico was born in Lentini in 1920 and she married Salvatore Tarantino. Their daughter, Giovanna Tarantino, saved the letter and Maria Rita Barretta sent us images of the letter.

Giusy Sciacca is a member of our weekly Zoom group and she offered to provide me with a translation of this letter.

NOTE- From Giusy Sciacca:  Dear Nick, after several attempts I decided to translate the letter literally as a first step. Of course, it is barely understandable in English as well, but this is how the letter is in (sort of) Italian. Please read my note at the end of the first page of the translation.

NOTE- from Nick Cimino: Punctuation and a few words have been added for clarity. 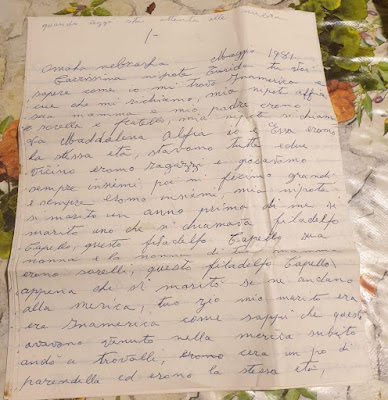 Dearest niece Turida, you want to know how I got to America and what I can remember.

My cousin* (Affia) Alfia, her mother and my father were brother and sister, my cousin’s name was Alfia Maddalena, she and I were the same age. We lived close to each other. We were girls and we used to play together. Then we grew up and we kept on hanging out together. My cousin got married one year before me and she married a guy, whose name was Filadelfo Cappello. His grandmother and your mother’s grandmother were sisters. This Filadelfo Cappello as soon as he married her, they moved to America. Your uncle, my husband, was in America, and as soon as he knew, he went to meet them right away. There was a family link between them, and they were the same age.

*She uses the word “nipote”, which literally is “niece(f.)/nephew (m.)”. In old Sicilian the term also covered the meaning of “cousin” and this is the case.

Syntax is of course very poor. It is barely understandable in Italian. It’s a precious mixture of Sicilian and struggled Italian. Almost impossible for a non-Sicilian to understand and translate. When they both were still in Lentini, they used to hang out and work together being really good friends. Your uncle always visited them. One day my cousin asked, “don’t you want to get married?” Your uncle said, “sooner or later I'll get married." My cousin then said to him: "Would you like a girl from Italy?" "How can I get a girl from Italy here?" My cousin said to him, I have a cousin. If you like we can send for her. He said let her come. I’ll pay for the trip and when she comes, we’ll get married only if she likes me and I like her. My cousin said she would have tried and that she did not know if the girl’s family would have agreed to make her travel – so she wrote to my father and she said (…) 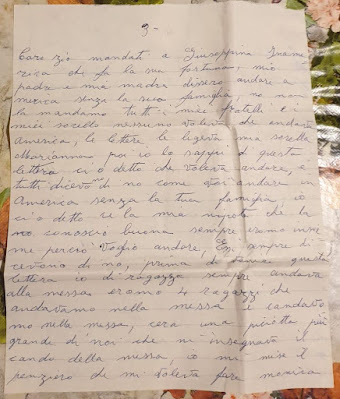 …dear uncle, send Giuseppina to America. She will make her fortune. My father and my mother said that without her family, we are not going to send her. Of all my brothers and sisters, nobody wanted me to go. My sister Marianna was reading the letter. I said I wanted to go, and everyone said no. How could you go without your family? I said that my cousin is there. I know her and she is good, and we were always together so I want to go. They always said no, before this letter arrived when as a girl I always went to church/mass. We were 4 girls going to the church and singing during the mass. There was a girl older than us, and she taught us to sing during the mass. I was thinking about becoming a nun… 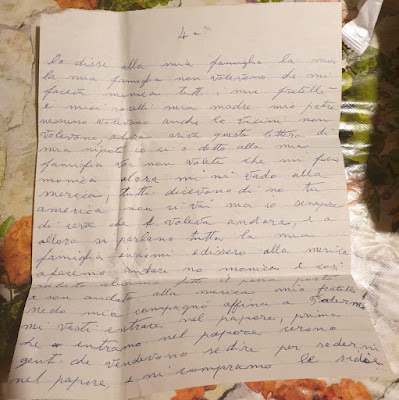 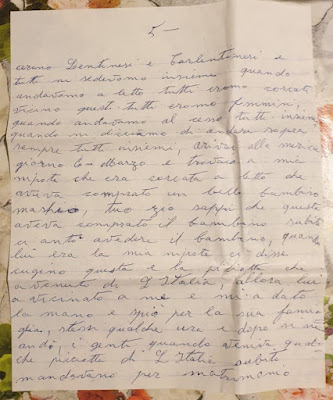 There were people from Lentini and Carlentini and we were all sitting together. When we went to bed, we all were laying down next to each other. All these were women. When we went to the toilet, we were all together. When I was told to go upstairs (probably the deck), we all went up together. I arrived in America on March 6th, and I found my cousin in her bed as she had just given birth* (she uses the verb “accattare” which literally means “to buy” in Sicilian, but it was and still is an idiomatic expression) to a beautiful son. Your uncle heard that the baby was born, and he went to see him. When he arrived, my cousin told him: “She is the girl coming from Italy.” So, he came closer and gave me his hand and he asked me about his family. He stayed for some hours and then went away. Whenever a girl arrived from Italy the people would send a wedding proposal right away. 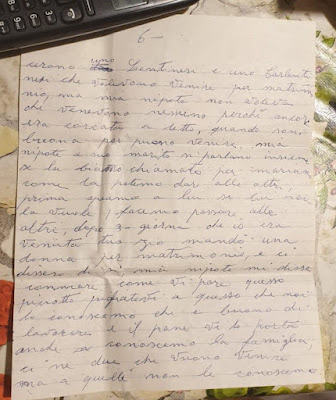 There was one guy from Lentini and one from Carlentini who both wanted to propose, but my cousin did not want anyone to come because she was still in bed. When I’ll feel better, they can come. My cousin and her husband had a talk. If we came for Mariano, how can we give her to the others. Let’s ask him first and if he doesn’t want her, we can consider the others. After 3 days from my arrival, your uncle sent a woman to propose the marriage and they replied yes. My cousin said to me, “commare” (godmother), what do you think about this guy. Please pick him as we know him. He is a good worker, and he gains the bread (food) and we also know his family. There are two other men who want to come for you, but we don’t know them. 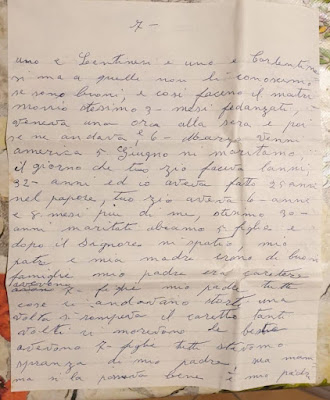 One is from Lentini and one from Carlentini, but we don’t know if they’re good. And so, we married. We were fiancés for three months. He came one hour during the evening and then he left. On March 6th I arrived in America and June 5th we got married. The day of your uncle’s birthday, 32 years and I turned 25 years old on the steamship. Your uncle was 6 years and 8 months older than me. We were married for 30 years, and we had 5 children. Then the Lord parted us. My father and my mother belonged to a good family. My father was a carter and had 7 children and he had always bad luck. Once his cart broke down. Sometimes his animals died. We were 7 children all depending on him. His mother was wealthy and … 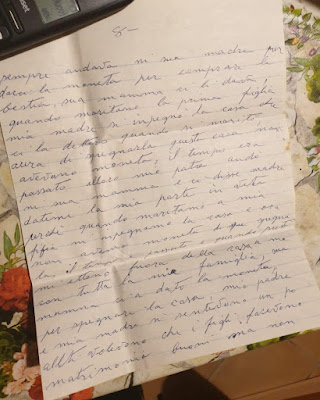 …he always returned to her to ask for money and buy new animals and she gave it to him. When the first daughter got married, my mother pledged the house she was given by her father when she got married. When they wanted to release it, they had no money. So, my father went back to his mother and said: mother give me my own part while you’re still alive because when our first daughter got married, we had to pledge the house. Now time has gone and soon we’ll be kicked out of the house with all my family. So, his mother gave him the money and they could have the house back. My father and my mother felt themselves in a higher social position and they wanted good marriages opportunities for their children, but… 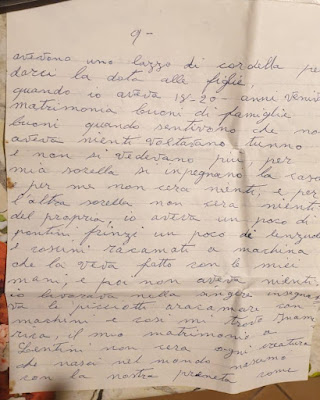 …they don’t even have a rope for the dowry of their daughters. When I was between the ages of18 and 20, I received very good proposals from good families. But as soon as they understood we had nothing, they disappeared. For my sister’s wedding, my parents pledged the house. For me there was nothing left and for the other sister nothing at all. I had some XXX (pontini?), fringes, some sheets and pillows I embroidered myself with a sewing machine and then I had nothing. I worked on my “Singer” (the popular sewing machine brand) and I taught the young girls to embroider using a sewing machine. So, I find myself in America. There was no wedding for me in Lentini. Every creature and human being born in this world is born under a planet. 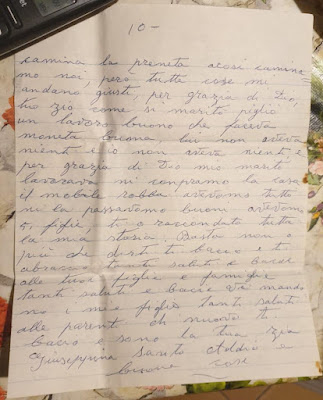 The planet turns and we walk alike in the world. Nevertheless, everything went well. Soon after getting married, your uncle found a good job which allows him to gain good money. He had nothing and I had nothing either, but thank Lord he worked, we bought a house, furniture, goods* (*she uses the term “robba”, very interesting) and we had a good quality of life, we had 5 children (3 boys and 2 girls). I told you all my story. Enough, I have nothing more to add. I kiss you and hug you. Say hello to your children and family. My children send greetings and kisses, to you and all our relatives again. I’m your aunt Giuseppina Santo, so long, wishing you all the best.

WOW, that is beautiful....  It seems she was happy with her choice to move to America and marry my grandfather. Her wedding pictures are gorgeous, and I think that they show a modest but full wedding party. She had a beautiful dress and veil. She has always been extremely practical. She used to tell me and Kathy that you choose if you have a good happy life or hard bad life by how you appreciate what you have. She said she chose to be happy and content with her good fortune in America. 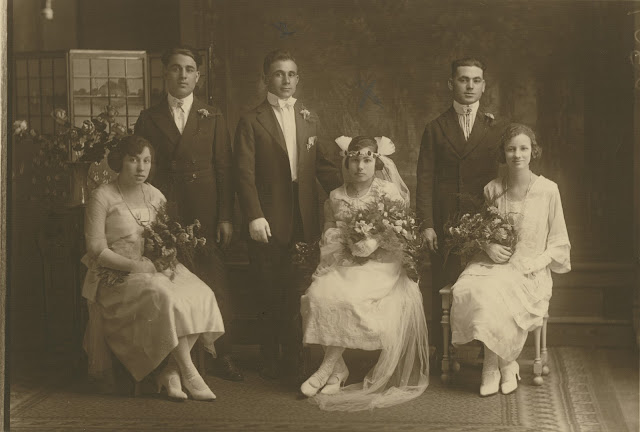 1921 Wedding of Mariano Santo and Giuseppa Ossino in Omaha, Nebraska

montesrule originally shared this to Ancestry.com on 31 Dec 2017

The woman on the left may be the cousin described in the letter whose name was Alfia Maddalena with her husband, Filadelfo Cappello.

Posted by Nick Cimino at 7:48 AM No comments: