Like most Sacramentans, I love Lady Bird and will be rooting for this movie on Sunday night.

Lady Bird is set in my hometown of Sacramento in 2002, the same year that Gerwig graduated from St. Francis High School. Gerwig's alter-ego is Christine "Lady Bird" McPherson, a senior student at a Sacramento Catholic high school. She dreams of escaping the "midwest of California" to attend an East Coast college. Her family is on the edge of economic ruin, and her mother repeatedly informs her daughter that she is an ungrateful brat with no appreciation for the sacrifices of her parents to provide a home and an expensive private school education. Mom's advice is to attend City College, go to jail and go back to city college when she gets out. It sounds rather bleak when you summarize it but I found this movie to be an intensely personal reflection of my feelings about the place that I call home.

Here are are a few of my favorite reviews that rang true for me:


Homecoming Queen- Greta Gerwig proves that you can indeed go home again with her stunning directorial debut "Lady Bird," a semi-autobiographical story about the Sacramento native’s senior year in high school. In her “love letter” to the River City, she fills the screen with nostalgia-soaked scenes of local landmarks and neighborhoods, revisiting her youth with the thoughtful perspective that only time can bring. And if growing Oscar buzz for the film is any indication, this is just the beginning for the first-time auteur and newly crowned Hollywood royalty. Long may she reign...
“It took time to realize that Sacramento gave me what home should give you, which is roots and wings,” says Gerwig.
Source: www.sactownmag.com/December-January-2018/Homecoming-Queen

The irony is that Gerwig's love letter to Sacramento will only increase the demand and reduce the supply of what once was an affordable, family-friendly lifestyle. This next review points to issues of economic anxiety that I felt as a child and have never been able to shake:


Lady Bird Is the Rare Coming-of-Age Movie About the Strain of Growing Up Poor
...what struck me as most remarkable about the film is its nuanced, deft handling of social class—a reality teen movies usually address with hyperbole or avoid altogether by making their characters white and comfortably upper middle class by default.
Lady Bird is coming of age in a time when social mobility is an increasingly rare phenomenon; where kids who are born poor tend to stay that way their whole lives and pass that inheritance along to their children. The movie also takes place between 2002 to 2003, a moment where everything around you felt precarious: 9/11 is still at the forefront of the nation’s hearts and minds, the country has invaded Iraq for reasons that wouldn’t become more clear until 15 years later, and the financial crash is just around the corner—all underscoring the listlessness Lady Bird acutely feels in her own life but doesn’t yet have the vocabulary to extrapolate to the world beyond herself.
SOURCE: https://splinternews.com/lady-bird-is-the-rare-coming-of-age-movie-about-the-str-1820228537

Sacramento has always had an inferiority complex that has been foisted upon us by our neighbors from the Bay Area. The ultimate indignity to Sacramento is to say that you are from San Francisco. Having worked in the "The City," for twelve years, I at least have a legitimate claim.


During a disastrous inaugural night as a college student in New York, a drunken Lady Bird tells a fellow freshman that she’s from San Francisco and is immediately rueful for selling out her hometown.
http://www.sactownmag.com/December-January-2018/Homecoming-Queen/

The funny part is that I have never claimed to hate Sacramento but I definitely could relate to angst expressed by Lady Bird.


We want to hate it and we go to great lengths to prove we hate it. We pay so much attention to it that we write about it with tremendous affection...
SOURCE: https://www.reddit.com/r/Emojerk/.../sacramento_is_the_midwest_of_california/


The film is introduced by a quote from a 1979 interview with Joan Didion, also a native of our hometown: “Anybody who talks about California hedonism has never spent a Christmas in Sacramento.”

I felt duty bound to consult the Sacramento Bee for its opinions on the matter.  http://www.sacbee.com/opinion/op-ed/soapbox/article186040483.html
I agree with the writer featured in the above article that "Lady Bird" is such an accurate portrait of our hometown that it feels like a documentary but certain realities were omitted.

One of my favorite lines in the movie is voiced by her friend, Danny: "Lady Bird always says that she lives on the wrong side of the tracks, but I always thought that that was like a metaphor, but there are actual train tracks."

I graduated from John F. Kennedy High School in 1971, located in the Greenhaven neighborhood.  My house near 24th and Meadowview was definitely on the "wrong side of the tracks" from Greenhaven. The words sung by Janis Joplin always resonated with me: "Oh Lord won't you buy me a Mercedes Benz. My friends all drive Porsches, I must make amends..."  I never did get that Mercedes but a few of my high school friends did drive Porsches and BMWs.  We would break the speed limit on I-80 and Highway 50 so we could wait in the long lines to get into the parking lot at the ski areas.

Hanging out with friends from the other side of the tracks helped me to blur my senses to the socio-economic realities in my white flight neighborhood.  Those realities became crystal clear in 1968 when Kennedy High School had riots on the quad.  The "tough kids" both white and black battled it out with the stakes that were yanked from the saplings in our immature campus landscaping. I watched powerless but safe from my perch in the third floor geometry classroom. Our student body president, Cornell West, led the reconciliation efforts and he now describes himself as  a "prominent and provocative democratic intellectual." His critics have branded him as a "socialist." I wonder what he would think of Lady Bird.

My escape from Sacramento did not take me too far away at first. I have always felt fortunate that I was able to attend UC Davis. I had to laugh at Lady Bird when she disdains her acceptance to UC Davis because it has earned its reputation as an agricultural school.  This review was written by a  much younger UC Davis student, who manages to capture my feelings:


Lady Bird: A Review - The Aggie
https://theaggie.org/2017/12/10/lady-bird-review/
Dec 10, 2017 -For UC Davis students in particular, “Lady Bird” speaks volumes. Sweeping shots of  Sacramento highways, the Tower Bridge and rural skylines evoke some sense of pride for the surrounding area of our favorite college town. While Lady Bird resents the fact that she was accepted into UC Davis — for its close proximity to her home and its fame as an agricultural school — she still deeply appreciates her hometown, although she may not see it quite yet herself.

So do yourself a favor and go see “Lady Bird.” See it with your mom. Remind her that you love her and that you do miss home more than you care to let on. See it for the hilarious references to our beloved UC Davis. Remember the feelings that you felt when you were in Lady Bird’s exact place as a high school senior. Immerse yourself in all that Gerwig has to offer to the audiences of “Lady Bird.” Remind yourself that you are [or were] young, naive and probably a bit selfish, but that sometimes, that’s okay.

I have chosen not to contribute to the Alumni Association but I will proudly close with the Aggie Yell: Bossy Cow-Cow Honey Bee-Bee Oleo Margarine Oleo Butterine Alfalfa Hay!!

...or is it Fake News? Newspaper research can reveal some of the most fascinating stories about our ancestors and their descendants. And so it is with one of my wife's ancestors, Mathias Brandenburg.

The legend of Mathias Brandenburg has become larger than life thanks to a lot of publicity that appears to have begun in 1888 and continued into the 20th century.

Some of that legend has been interwoven with facts to give authenticity to a bit of "Fake News."

The following story has been published on Ancestry.com and it shows how facts and fiction have been woven together to create legend which is propagated by well meaning genealogists. Here is the first paragraph of the story:

by Gwendolyn Brandenburg Proffer
at Clark County KYGenWeb
Matthias Brandenburgh was born in the Palace in Berlin, Brandenburg, Prussia about 1738. His brother Solomon witnessed his birth. Matthias (Tice) and his brothers were members of the Hohenzollerns, the ruling family of Prussia and Germany, his grandfather Alfred being a half first cousin to Friedrich the Great of Prussia (1712-1786). Matthias’ great grandfather was "The Great Elector", Friedrich William of Brandenburg (1620-1688).

The source for this article was referenced as  http://kykinfolk.com/clark/family/fr029-brandenburg.htm but that website appears to have been part of the Rootsweb site that Ancestry.com has taken down indefinitely.  This story of royal origins was probably based on a number of newspaper articles which were published in 1888 which claimed that the Brandenburgs were heirs to a fabulous estate. The first article that we have found is dated August 11, 1888 and was published on the front page of the Indianapolis Journal: 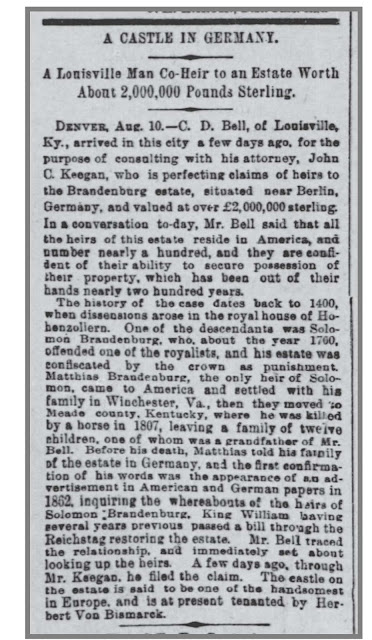 This article says that Matthias Brandenburg:

"told his family of the estate in Germany, and the first confirmation of his words was the appearance of an advertisement in American and German papers in 1862, inquiring the whereabouts of the heirs of Solomon Brandenburg, King William having several years previous passed a bill through the Reichstag restoring the estate."

Mr. C.D. Bell claims to have traced the relationship and immediately set about looking up the heirs.

"The castle on the estate is said to be one of the handsomest in Europe and is at present tenanted by Herbert Von Bismarck."

Curiously, none of the 1862 newspaper advertisements have been found nor has the bill that supposedly passed the Reichstag been found. But that did not stop dozens of newspapers across the United States from publishing these spurious accounts of an estate with one of the finest castles in Germany.  C.D. Bell appears to have been a master of publicity. 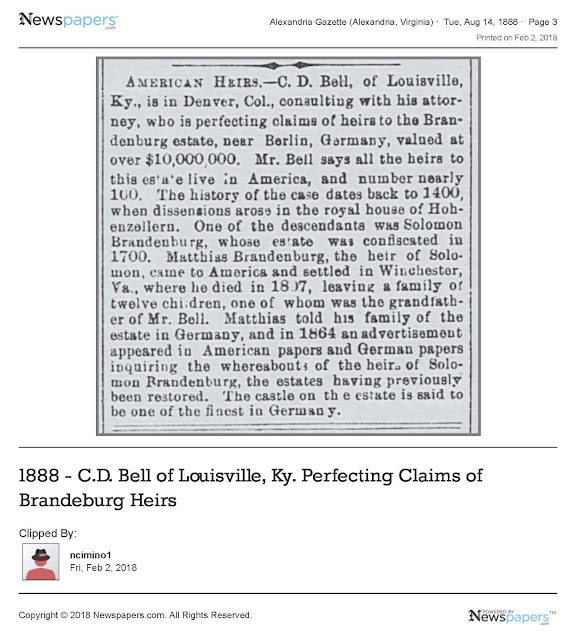 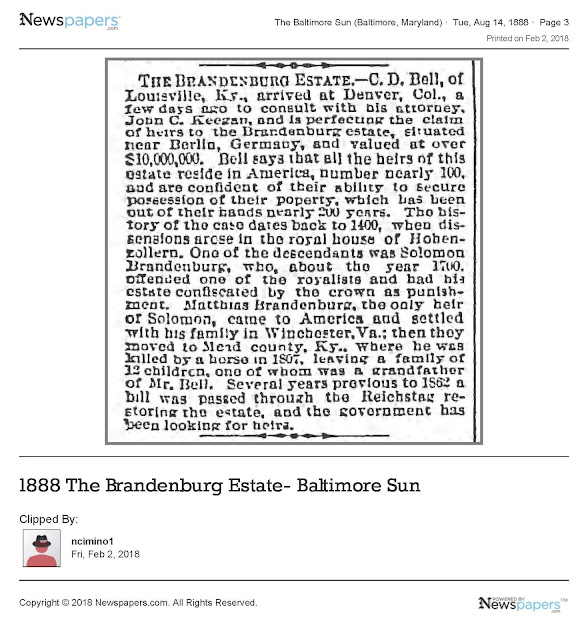 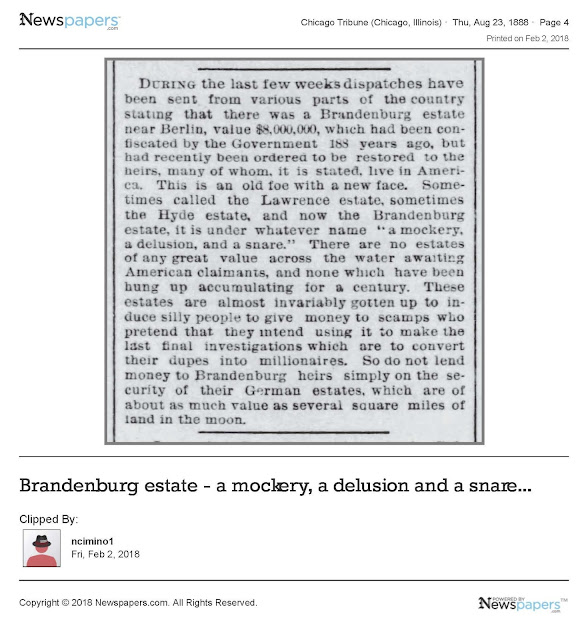 Finally one of these newspaper editors starts to be suspicious that perhaps a fraud is being perpetrated. But that did not stop many other editors from publishing more delusions. 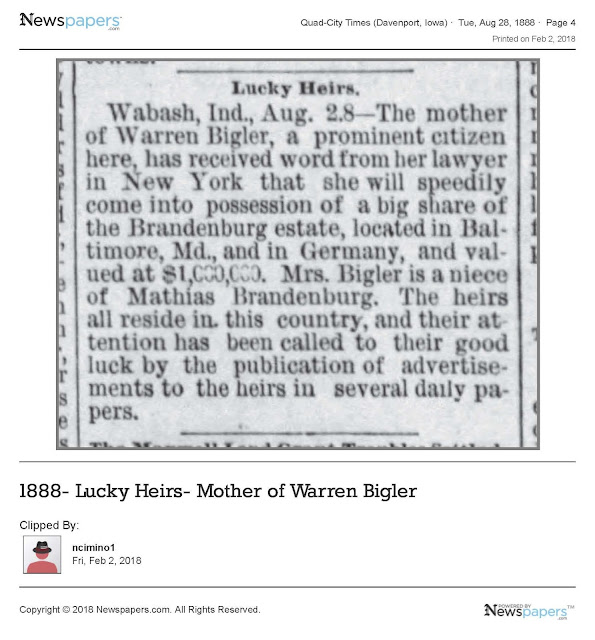 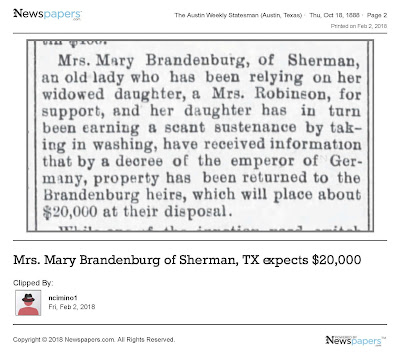 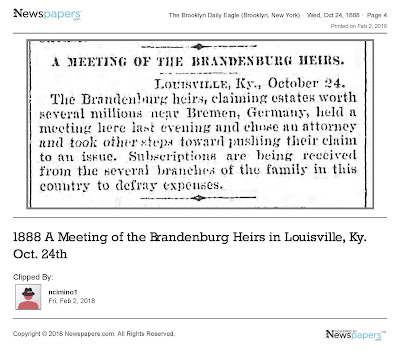 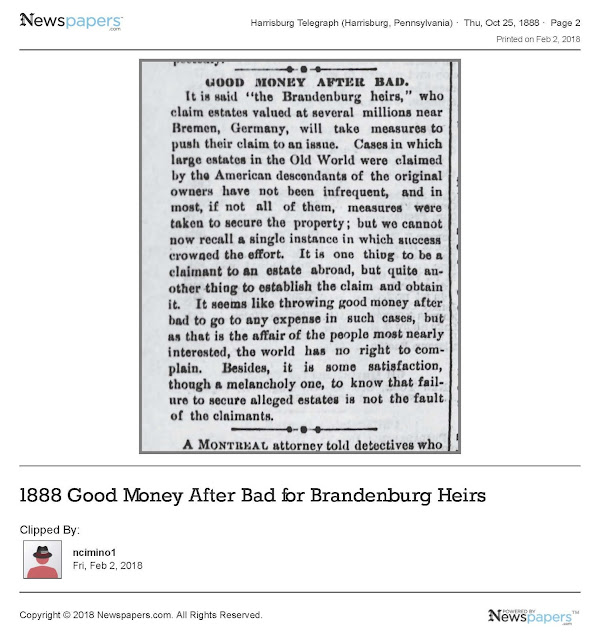 Finally another skeptic but more articles appear in 1889. 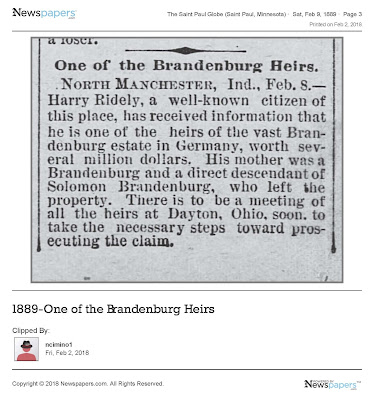 The story seems to have been resurrected in 1902 as Mrs. A.A. Hurst of Florence, Colorado claims to be an heiress in the following story: 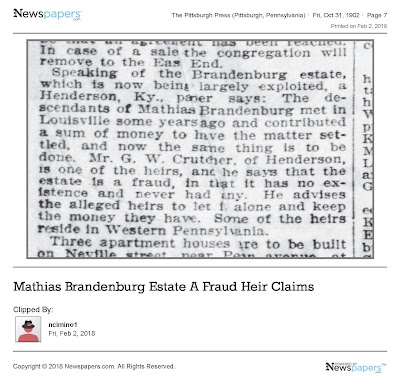 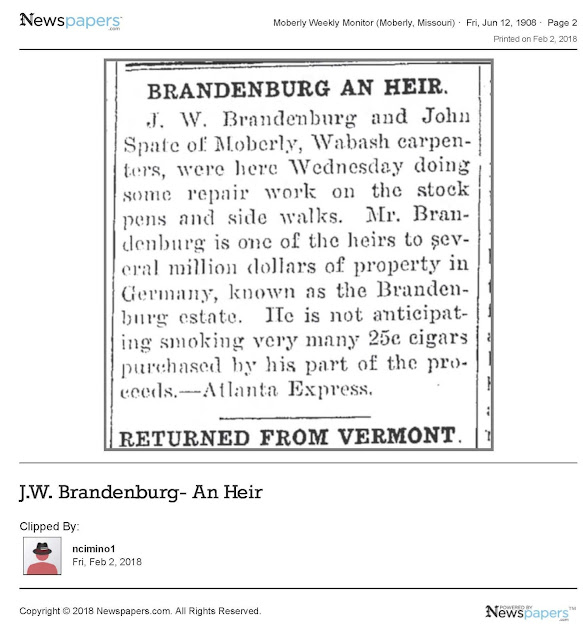 The above article made me smile when Mr. J.W. Brandenburg acknowledges that "he is not anticipating smoking very many 25 cent cigars purchased by his part of the proceeds."

The story that was published on Ancestry.com about Mathias Brandenburg does go on in great detail but you have to question all of their source material given how easily they were seduced by the scam. Here is the rest of the story:


The truth about Mathias Brandenburg is that his descendants have been duped into thinking that they are heirs to a royal fortune. Do not let the fact that someone cites their sources fool you into believing everything that is said.  There may be several facts interspersed with the lies. As genealogists, we need to do a better job of sorting fact from fiction.