Search the Hometown Paper Too!

Don't be satisfied with just one obituary for your ancestor. Many of our ancestors moved away from their hometowns and settled elsewhere.  In our case, our family left the Missouri Valley and settled in the Sacramento Valley.  But your ancestors are often not forgotten in their hometown, especially if they have family that remained. Case in point is this obituary for Mary Iza McCrory, my grandmother that I never met. She died in Sacramento, California but she grew up in Sioux City, Iowa.  She had two sisters that remained in Sioux City.  Most likely it was one of her sisters that gave this report to the Sioux City Journal:


I already had an obituary from the Sacramento Bee but it did not mention several key facts. See if you can find these important additions to my grandma’s story.

Friends are invited to attend the funeral Friday morning at 8:30 o'clock from the George L. Klumpp Chapel of Flowers, 808 O Street, thence to Holy Spirit Church, Land Park Drive and Cordano Way, where a requiem mass will be offered at 9 o'clock for the repose of her soul. Interment St. Mary's Lawn. Recitation of the Rosary tomorrow (Thursday) evening at 8 o'clock.


HERE ARE THE DIFFERENCES THAT I NOTICED:

The Sacramento obituary has details about the funeral, requiem mass and burial that Sioux City did not have. Between the two obituaries we have a much richer picture of the life and death of my grandmother. So search for those newspaper articles from the hometowns.  You might be surprised at what you find.
Posted by Nick Cimino at 10:22 AM 4 comments:

Get Job for Father

While searching for my surname on Newspapers.com, I came across this fascinating article about my grandfather, Dick Cimino, his older sister, Camilla and their father, Tony Cimino. I have heard several stories about Tony sending his children and grandchildren out to speak for him.

This article provides evidence to support our oral history. It also gives us a glimpse into the life of an immigrant family in Sioux City, Iowa in 1915. 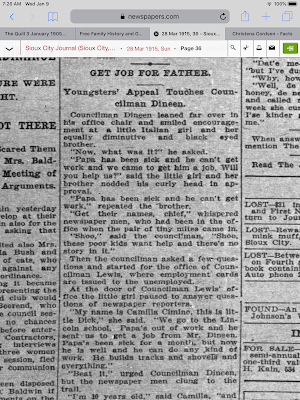 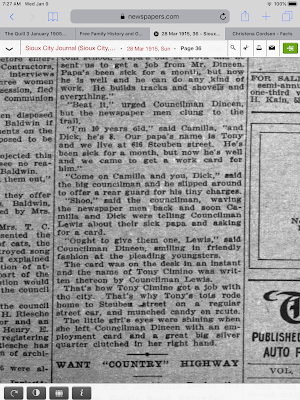 Posted by Nick Cimino at 4:54 PM No comments: