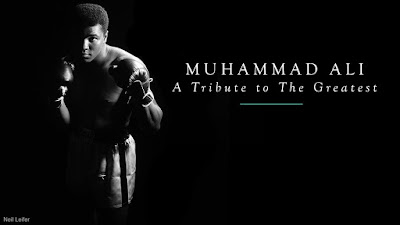 The tributes for Muhammad Ali have been flowing throughout the weekend.  His accomplishments have earned him memorials throughout the world.  Television and news reports have centered on his encouragement to others to achieve greatness in their endeavors.  Perhaps Gary Younge of Guardian.com said it best:


"As tributes have poured in this weekend from world leaders and sporting figures, boxing fans and political activists following Muhammad Ali’s death, it’s clear that, from beginning to end, he understood he had a job to do while he was on the planet – inspire people."

As we pay tribute to a great man, let us also take time to memorialize the everyday people who never achieved fame or fortune but whose lives built a foundation to shelter posterity. Many of these ancestors have labored without recognition and their memorials are either non-existent or are fading away. Perhaps the beautiful memorials to Muhammad Ali can inspire us to remember our ancestors and the forgotten people throughout the world.

Gravestones have been used for centuries to serve as a memorial to the life of a loved one.  Many ancestors are unfortunately buried in unmarked graves.  A gravestone was an expense that many families could not afford.  Wooden markers were used on many graves.  Wooden markers are biodegradable and do not survive for very long.  Gravestones can get buried or washed away by flooding. Even gravestones are biodegradable over time.  Photographing and preserving images of gravestones can ensure the long term preservation of the information that they contain. What about the unmarked graves?

One way to find the location of a grave is through the death certificate.  Death certificates for Texas and many other states are available on Ancestry.com and FamilySearch.org.  Many wonderful genealogy volunteers are creating "Virtual Cemeteries" on FindaGrave.com and other cemetery websites by using death certificates to "mark the location" of graves.  Two volunteers that I greatly admire are Lanny Martin and Melodey Hauch that created a virtual cemetery for the Magnola Cemetery between League City and Dickinson.  I wrote about their efforts in this blogpost from 2014:

There are many more volunteers that are involved in similar efforts throughout the world.  The importance of this cemetery preservation effort for genealogy cannot be overstated.  Cemeteries put our ancestors in a geographic and historical context that is essential to understanding their lives.

The death certificate of Lela Holmes Brookins was one of the starting points for my research on this family:

o   The informant on this death certificate was Cora Mitchell; Cora Mitchell is most likely the daughter of Nelse Brookins and Lela Holmes; a marriage record was found for Cora Brookins to Sam Mitchell dated 26 May 1918 in Henderson County. Also found  several census records for Sam and Cora Mitchell
o   The parents of Lela Holmes Brookins were given as Milo Holmes and Rhoda Johnson
o   Lela Brookins was buried in Stockard Cemetery in Henderson County;
o   Several more Brookins family members are also buried there but there was no memorial on FindaGrave.com for Lela Holmes Brookins
o   Lela Brookins died in the Memorial Hospital in Athens
o   Her residence was on a farm on Route 4, Athens

A Find a Grave Memorial was created for Lela Brookins to record the fact that she was buried in Stockard Cemetery at the following link:

I also created a memorial for her father Milo Holmes and linked it to her memorial.  Milo is buried in the Big Rock Cemetery according to his death certificate but there may be no marker.  Here is the link to the FindaGrave Memorial that I created for Mr. Holmes:

The Find a Grave page for Big Rock Cemetery is very informative about the history of the Big Rock community both black and white.  As you can see in the following photograph there are many unmarked graves.

Muhammad Ali is an inspiration to me to memorialize all of America's forgotten heroes. 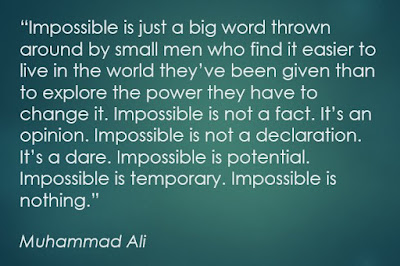