If you are looking for a way to celebrate Father's Day with your dad, you might want to consider the events scheduled for Juneteenth in Galveston this week.

Galveston.com has the following to say about the weekend's festivities:

When you head to Galveston each June, you’ll be coming home where it all began as the island hosts several days of festivities to celebrate Juneteenth – a holiday that originated in this historic beach town.

This year marks the 151st anniversary of Juneteenth, which will be celebrated with parades, festivals, picnics, African-American heritage exhibits, reenactments, concerts and more.

On June 18, the island will host two Juneteenth parades – one beginning at noon at 26th and Winnie and ending at 41st and Ball streets – and the other beginning at 7 p.m. at 20th and Strand, ending at 28th and Avenue Q. Both parades will feature festive floats, entertainers and bands. The evening parade will end with a fireworks show.

New this year, the island will host the inaugural Galveston Crawfish Festival June 17-19 at the Kermit Courville Stadium parking lot as part of its Juneteenth festivities. The event will include crawfish and food vendors, a Kid’s Zone and live music from Zydeco and blues artists. For details, visit http://gccrawfishfestival.com.

Finally, the Galveston Juneteenth Coalition will host the 37th annual Al Edwards Emancipation Proclamation Reading and Prayer Breakfast at 8:30 a.m. on June 18 at the historic Ashton Villa – the location of the island’s official Juneteenth monument.

Reedy Chapel A.M.E. Church will commemorate the first known Juneteenth celebration in U.S. history at 6 p.m. June 19 with its annual march from the steps of the Old Galveston County Courthouse to the church at 2015 Broadway Ave. The public is welcome to participate.

More than 20 events will take place throughout June for Galveston’s 2016 Juneteenth celebration. For a list of upcoming events, click here.

Many people think slavery ended on September 22, 1862 – the date Abraham Lincoln issued the Emancipation Proclamation. In reality, many slaves weren’t freed until much later when news of the proclamation reached their towns. The last of those slaves lived in the South and were freed on June 19, 1865 after the Emancipation Proclamation was read on a harbor pier in Galveston, Texas. This date eventually became known as “Juneteenth.” While celebrations were long held in Galveston and various parts of the country in earlier years, Texas lead the way in making Juneteenth an official state holiday in 1980.Today, Juneteenth is celebrated in more than 40 states throughout the country.


Texas had its own unique Emancipation Proclamation also known as General Order #3.  Read what the Handbook of Texas Online says about Juneteenth:

JUNETEENTH. On June 19 ("Juneteenth"), 1865, Union general Gordon Granger arrived in Galveston and issued General Order Number 3, which read in part, "The people of Texas are informed that, in accordance with a proclamation from the Executive of the United States, all slaves are free. This involves an absolute equality of personal rights and rights of property between former masters and slaves, and the connection heretofore existing between them becomes that between employer and hired labor." The tidings of freedom reached the approximately 250,000 slaves in Texas gradually as individual plantation owners informed their slaves over the months following the end of the war. The news elicited an array of personal celebrations, some of which have been described in The Slave Narratives of Texas (1974). The first broader celebrations of Juneteenth were used as political rallies and to teach freed African Americans about their voting rights. Within a short time, however, Juneteenth was marked by festivities throughout the state, some of which were organized by official Juneteenth committees.


There are plenty of activities in Galveston to choose from this week.  The following images also give more information about the Galveston events: 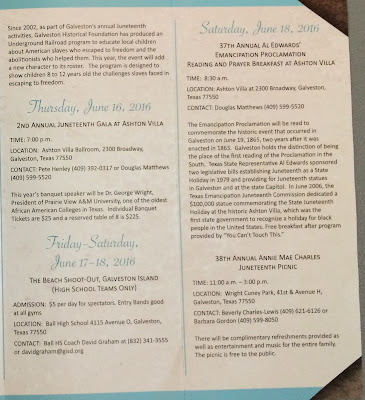 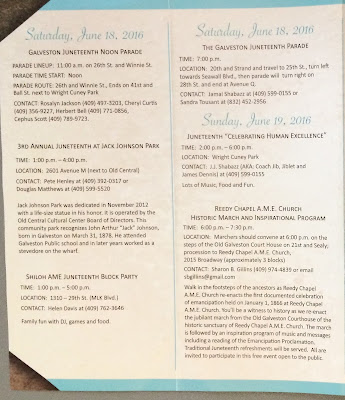