A Poignant Farewell from Germany

Sometimes in my genealogical journeys, I run across a document that I have never seen before.  I recently discovered a very unique document in my research on the Prasse Family of Cleveland, Ohio.

It all started at the website of the Western Reserve Historical Society.  After a bit of searching I located the WRHS Genealogy Index:

I entered the surname PRASSE and came up with the following matches: 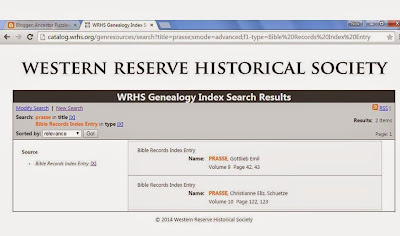 These records were described as Bible records but when they finally arrived, I learned that this was a slight misnomer.  What I actually received was an original baptismal record for Emil Prasse from a German language church in Cleveland and a farewell poem from Emil's maternal aunt that remained behind in Germany.

The farewell poem was one of the most mystifying documents that I had ever read.  The document was transcribed from the original German and then translated to English. 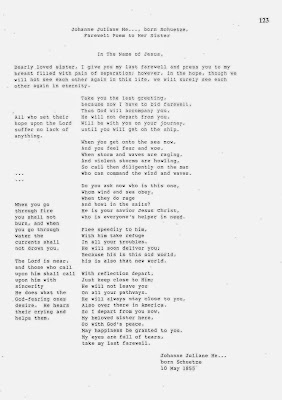 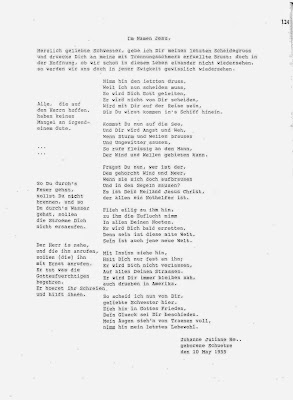 The tone of the poem made it sound like an obituary or a eulogy:

In The Name of Jesus,

But when I looked at the date at the bottom of the poem, 10 May 1855, I realized that this eulogy was written prior to the departure of the Prasse family from Germany.  It was mournful because Aunt Johanne knew that she would never see her sister again.


Take you the last greeting
because now I have to bid farewell,
Thus God will accompany you,
He will not depart from you,
Will be with you on your journey,
until you will get on the ship

When you get onto the sea now,


And you feel fear and woe,
When storm and waves are raging,
And violent storms are howling,
So call then diligently on the man
Who can command the wind and waves.

Do you ask now who is this one,


Whom wind and sea obey,
When they do rage
And howl in the sails?
He is your savior Jesus Christ,
who is everyone's helper in need.

Flee speedily to him,


With him take refuge
In all your troubles.
He will soon deliver You;
Because his is this old world,
his is also that new world.


Just keep close to Him;
He will not leave you
On all your pathways.
He will always stay close to you,
Also over there in America.
So I depart from you now,
My beloved sister here,
Go with God's peace.
May happiness be granted to you.
My eyes are full of tears,


This poem is such a treasure, and I am so glad that it was preserved in this fashion.  The poem is also a great example of a genealogical treasure with no provenance.  The Genealogical Committee of the Western Reserve Historical Society had failed to cite the source of this document.  Even worse it appears that someone had the original image from which a transcription was made but they were unable to make out Aunt Johanne's married name.  The original image was also not included in the publication.

But as a genealogist, I must always look on the bright side.  The title page for this record did reveal the following:

AND...of course the number is no longer in service.

Horrors!!! I may actually have to write a snail mail letter with a self addressed stamped envelope.

It appears from this description that the original hand written poem may not have been submitted to the WRHS.

These two records when read together reveal a great deal about the Prasse family.  Here is the original image of the baptismal record. 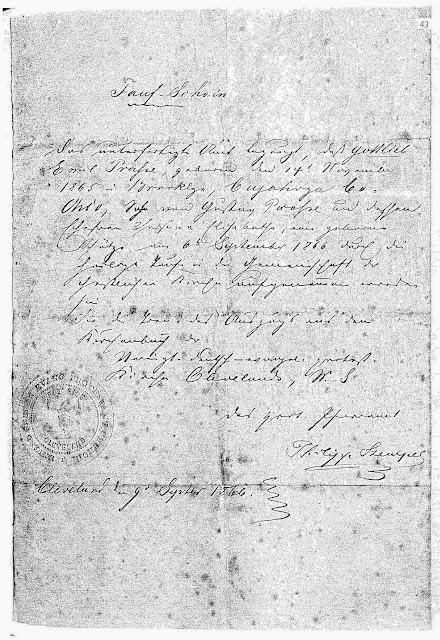 Here is a transcript of the baptismal record:

The undersigned book certifies that Gottlieb Emil Prasse, born on 14th November 1865 in Brooklyn, Cuyahoga Co., Ohio, son of Gustav Prasse and his wife Christianna Elisabethe, who was born Schuetze, was on the 6th September 1866 admitted through Christian Baptism into the congregation of the Christian Church.

The record is embossed with a seal that reads as follows: UNITED GERMAN EVANG[ELICAL] PROTESTANT CHURCH WEST SIDE CLEVELAND

I have written before about this church which is now known as the Westside United Church of Christ, 3800 Bridge Ave, Cleveland, OH 44113.  The church still holds its original records which apparently have not been microfilmed.  I have made a written request for a search of their records related to the Prasse family.  It appears that there may be several baptisms, marriages and burials of Prasse family members recorded in the books of this church.

The farewell poem and the baptismal certificate reveal several clues about the Prasse family.  Together the two documents confirm that Christianna Prasse's maiden name was Schuetze.  Christianna's sister was deeply religious so it seems likely that both sisters shared a Protestant faith that was instilled by their parents.  It appears that they may have been dissenters from the established Lutheran church of Germany as the United German Evangelical Protestant Church of Cleveland was a decidedly different brand of religion.  Clearly the Prasse family departed from Germany shortly after the date of 10 May 1855 on the poem.

But mostly I am struck by the mournful words of Aunt Johanne's poem.  The incredible pain and loss that she felt upon the departure of her sister from Germany to America.  She took some consolation in her faith that she would meet her sister again in heaven.  The fact that her poem was preserved by the WRHS has made it possible for all of the Schuetze and Prasse descendants to experience the joy of that reunion here on earth.

I would especially like to thank Dieter Gaupp for his work on the translation of the baptismal record.