The Historic New Orleans Collection recently hosted an exhibit entitled: Purchased Lives - New Orleans and the Domestic Slave Trade, 1808-1865.  This museum exhibit examined the lives of the human beings that were traded as property and considers New Orleans role as antebellum America's largest slave market.  We had the good fortune of visiting this exhibit twice last week before its conclusion on July 18.  To view a brief summary of the exhibit go to the website of the Historic New Orleans collection: Purchased Lives Exhibit

In the six decades before the Civil War, approximately one million enslaved people were forced to leave behind their homes and families and were sent to labor in the sugar cane and cotton fields of the Deep South.  They traveled by steamboats and sailing ships, wagons and railcars but most came on foot. When they arrived in New Orleans, the traders would advertise the sales of enslaved men and women in the local newspapers.  The newspapers were also regularly used to post rewards for the return of runaway slaves.  The exhibit presented many of these advertisements in a booklet which was a very thorough compilation of images and text of the exhibit.  The booklet is not currently available as a PDF but I have made a request with the Historic New Orleans Collection that the guide be published online.

One feature of the exhibit that has been placed online is the Lost Friends database.  The contents of the database are described here:

I performed a few searches for surnames of my client, Gesenia Sloan Pena to see if any of her family names were listed.  I only found two matches for the surname "Sloan."

After reviewing the description again, it became clear that the online database only includes one year of the advertisements that were published for over forty years by the Southwestern Christian Advocate newspaper.  It is also clear that the contents of these ads are a treasure trove for African American family history researchers.  The first ad directs pastors to read the requests from their pulpits and to report any cases of reunions which were facilitated by means of the letters published in the Southwestern.  I would certainly like to read one of those reports.

Here is an article that I found with a search of Brenham, Washington County, Texas:

This next article shows how names that were used during slavery often changed after emancipation.  The Rev. B.M. Taylor used the surname of his slave owner, Louis Taylor.  Presumably his brothers, Sam, Peter and Jeff and sister Amy also went by Taylor.  However, their lost sister, Darkens Taylor changed her name to Maria Walker. 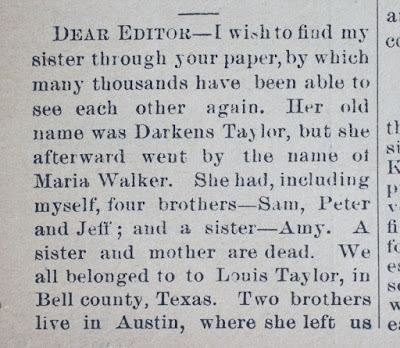 Since the letter from Rev. B.M. Taylor mentions Huntsville, Texas, it would seem an appropriate time to remind you that I will be making a presentation on Immigration and Emigration Records on July 31, from 8:30 to 12:30.  Here are the details for the event which runs on both Friday, July 31 and Saturday, August 1, 2015:

Pre-registration is encouraged, but not required. For more information go to www.myhuntsvillelibrary.com or contact: Mary Kokot, Adult Services Coordinator at 936-291-5471.
Posted by Nick Cimino at 11:31 AM