Judy Garland is well known as a U.S. stage and screen super star.  Did you know she was descended of a Canadian Loyalist family?  She certainly was convincing as a Yankee Doodle Dandy when she performed with Mickey Rooney in Babes on Broadway.  We have taken an interest in her family history because she is my wife's cousin.


The Loyalists were American families that pledged their loyalty to the British crown during the Revolutionary War.  They became refugees to Canada during and after the war.  The British government gave land grants to these Loyalist families along the St. Lawrence River in Ontario. Similar to our Daughters and Sons of the American Revolution, the Canadians have a lineage society called the United Empire Loyalists.

These quotes from Ancestry.com explain our Canadian heritage:

Our common ancestors with Judy Garland are Hugh Fitzpatrick 1809-1878 and Margaret Ross 1807-1845.  Ms. Garland remained very close to her Milne and Fitzpatrick extended family until the death of her Grandmother (Eva Fitzpatrick Milne 1865-1949) who lived with her in California until 1949.

I wonder if Judy Garland knew that she had a Loyalist deserter and spy in her family tree.  Family history can be more interesting than fiction. Peter Fitzpatrick and his son, William were the loyalists in the family tree.  Here is an image showing what was written about Peter in the 1885 Centennial Book of the United Empire Loyalists:

When you read Peter's claim you see that he was held in the Albany jail convicted as a spy at the end of the war: 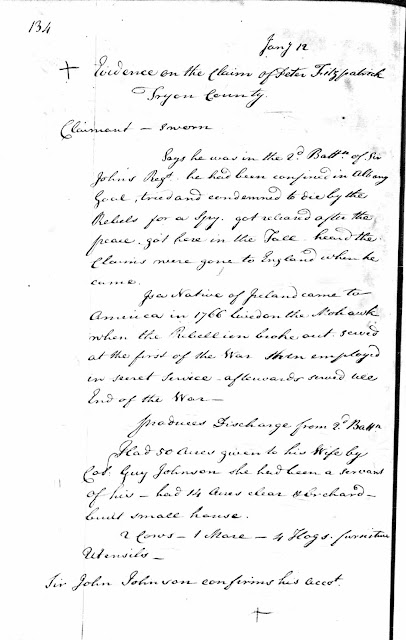 Says he was in the 2nd Battalion of Sir John [Johnson]'s Regiment.  He had been confined in Albany Gaol [Jail], tried and condemned to die by the Rebels for a Spy.  Got released after the peace.  Got here in the Fall.  Heard the Claims were gone to England when he came.

Is a Native of Ireland.  Came to America in 1766.  Lived on the Mohawk when the Rebellion broke out.  Served at the first of the War.  Then employed in Secret Service.  Afterwards served till End of War.

Produces Discharge from 2nd Battalion.  Had 50 acres given to his Wife by Col. Guy Johnson.  She had been a servant of his.  Had 14 acres clear & Orchard.  Built small house. [Had] 2 cows- 1 Mare-4 Hogs, furniture, utensils.

My description of documents like this one is: Genealogical Gold Mine!  I loved 007 as a kid so it was with great joy that I found that we have a member of "Her Majesty's Secret Service" in our family tree even if he was on the wrong side!  So how many of you Yankee Doodle Dandies can claim that one?

I did notice that others on Ancestry.com have taken a big interest in Judy Garland.  I looked at her profile in our family tree and there were 105 Ancestry hints. But only 9 family tree hints showed so maybe she was not as popular as I thought. There are 25 other family trees at Ancestry that claim Peter Fitzpatrick as an ancestor so he wins the popularity contest at least for now.

Here is the citation for the claim of Peter Fitzpatrick: