The importance of collaborating with other genealogists researching your ancestors cannot be overemphasized.  You will find that you have many distant cousins that share your interest in family history.  Don't be afraid to contact people that connect with you and ask them for information.

Recently I have entered into a very successful collaboration with a group of cousins who are researching the Eggert family that hails from Steimke, Saxony, Germany.  My thanks to Kathi Appelt, Ellen Dinges and other members of the family who have helped me compile the following information.

One particularly interesting member of the Eggert Family is Captain William C. Eggert AKA Christian William Eggert who was a pilot and a ship's captain in Galveston and on the Brazos River in Texas.  The obituary of Captain Eggert gives us an overview of his life. 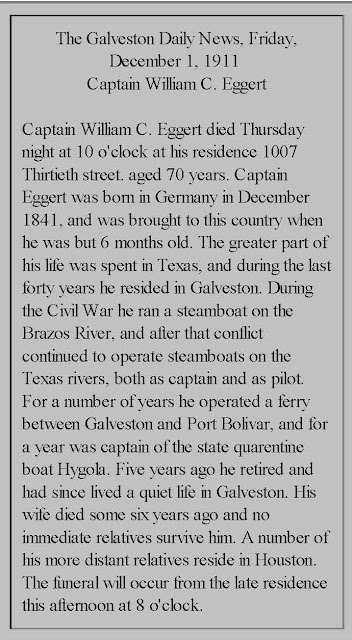 Captain Eggert's early life is still somewhat shrouded in mystery.  The obituary states that he was "born in Germany in December 1841 and was brought to this country when he was but 6 months old." It is more likely that he arrived in this country in 1847 when he was five or six years old.  The 1900 census states that he immigrated in 1845 and the 1910 census states that he arrived in 1846.  We believe that his actual arrival was on the Brig Helen and Elise in Galveston on 7 December 1847. There were two families named Eggert that sailed on that ship as shown in the following image:

Several transcriptions have been made of the passenger list of the Brig Helen and Elise but I particularly like the one that was done at the following website:

When Judie Cale Nelson made this transcription back in 2000, her reading of the passenger list led her to assume that all of the passengers were going to Texas.  Ms. Nelson paid particular attention to the names of the villages that were listed as the place of origin for these immigrants.  This is very rare to find the names of the hometowns on a passenger list. The transcription by Ms. Nelson is very helpful because it provides geographic context for the location of the villages of this group of German immigrants.

The two Eggert families on the passenger list came from Brome and Steimke.  According to Ms. Nelson, the villages of Brome, Steimke, Parsau, Apenburg, Ahnebeck, Jübar and Germenau are all near each other and located NE of Braunschweig also known as Brunswick.  These places are also close to a place named Wolfsburg which you may recognize as the location of the Volkswagen headquarters and the largest car plant in the world.  There is another village named Steimke NW of Brome.

The names on this passenger list bear further scrutiny as they become part of the FAN club [Friends, associates, neighbors] for the Eggert family.

The mention of Confederate service in the obituary is supported by the following two citations:

The Houston Post, Sunday, December 30, 1962, by Gayle McNutt, page 9, Section I, "Battle of Galveston."
"...Magruder decided to move up the attack to the night of Dec. 31. Still it was to come as no surprise to the Union forces.
Sharpshooters were needed to man the cotton-clad Confederate steamboats and Magruder issued a call for volunteers that was answered by members of Sibley's and Green's Regiments, who were promptly dubbed "horse marines."
Col Tom Green led the sharpshooters, who volunteered with the understanding that it was a mission from which they were not likely to return..."
(NOTE in Margin: "Mom's Uncle Capt: C.W. EGGERT was in this battle on cotton laden gunboat. He was very young at time. After a few years, became pilot, and was for many years a captain.")

No listing for Captain Eggert in 1866.

No listing for Captain Eggert in 1868.


1874 Shows the first listing for William Eggert as a pilot residing on Avenue K between 26th and 27th Street.

For some unknown reason he was not listed in 1880.


He shows up again on 30th street in 1890.  The 1890 Tax List of Galveston Precinct No. 1 shows that C.W. Eggert owned Lot 7, Block 150 valued at $1300. Based on Galveston Appraisal District records that description is consistent with an address of 1007 30th street.  There is a current property listing in Appraisal District records for 1011 30th street which is described as Lot 8 of Block 150.  Lot 7 appears to have been merged into a commercial property on the corner of Broadway and 30th Street. The house of Captain Eggert was apparently razed for a fast food restaurant which is now serving as a title loan business.


But William Eggert, the captain and pilot did not appear.


In 1895, Captain Eggert resided at 1007 30th Street and as you will see he continued to reside there for the rest of his life.


The information on the death certificate for William C. Eggert was provided by a Mr. J. Singer of 2126 Strand in Galveston.  Captain Eggert died on November 30, 1911 and was buried in the Old City Cemetery.  The doctor that attended Captain Eggert in his last hours was Dr. Brooks Stafford.  Mr. Singer gave the first name as William E. rather William C.  He also stated that he was born December 4, 1841 in Germany and that he was a "Sea Captain."  The length of his residence in Galveston was 40 years. 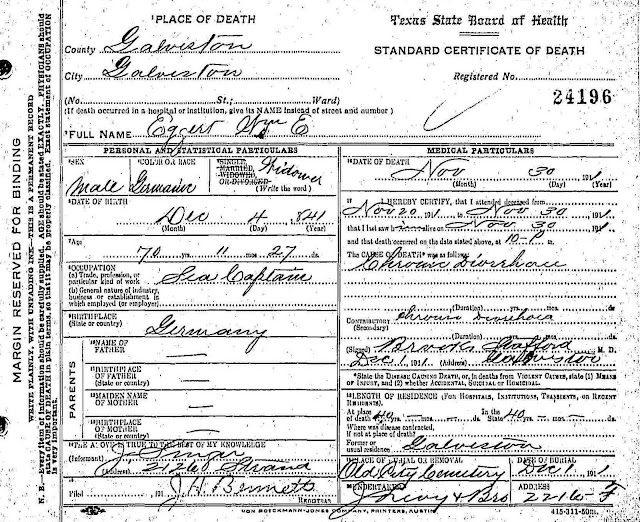 The church burial record provides some other interesting information on Captain Eggert:

This record gives his birthplace as what appears to be Letzinger, Saxony.  His address matches with the city directory.  It is also noted that he had no direct issue.  There is a place called Letzlingen in Saxony which is in the vicinity of Steimke and Brome.  Letzlingen is a village and a former municipality in the district Altmarkkreis Salzwedel, in Saxony-Anhalt, Germany. Since January 1, 2011, it is part of the town Gardelegen per Wikipedia.  Here is a map of the route from Steimke to Gardelegen. 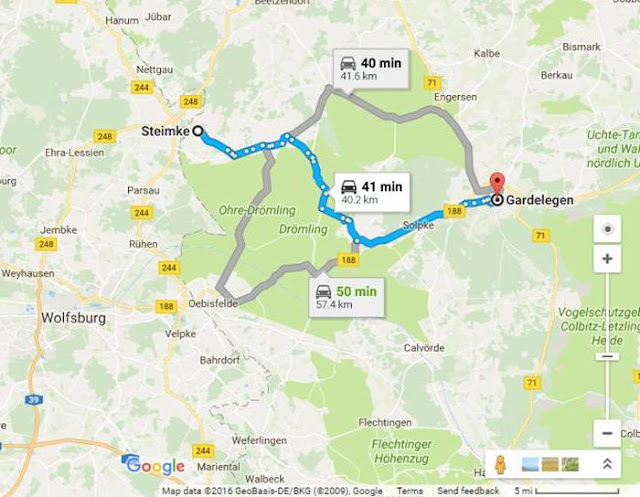 When you page back using the filmstrip view on Ancestry.com, you can view the title page for the burial record which is conveniently written in both English and German: 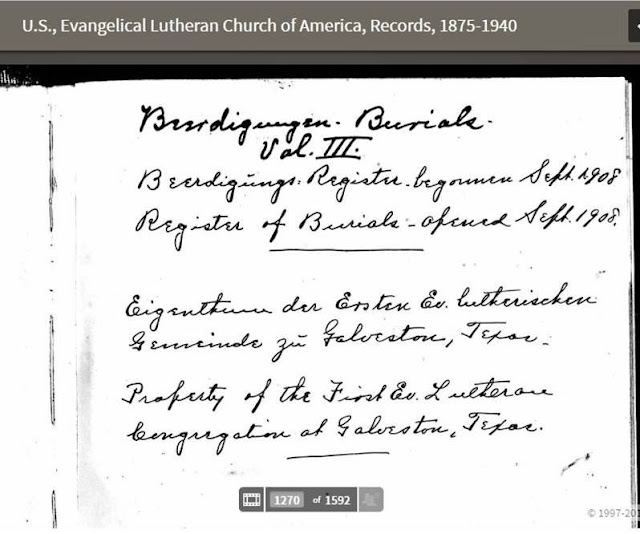 To trace the story back further, we will need to consult some of the German parish records in this part of Saxony.  Parish register transcripts of baptisms, marriages and deaths for Steimke, Sachsen, Preußen, Germany for the period 1823-1860 are available on Family Search microfilm number 1190638.  This parish also includes Brome, Cunrau, Germenau, Fahrstedt, Bökevitz, Nettgau, and Wendisch Brome.

Another lead for further research comes from the following article from the Galveston Daily News: 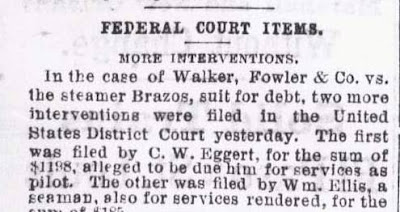 Captain Eggert filed an intervention in the case of Walker, Fowler & Co. vs. the steamer Brazos, suit for debt.  C.W. Eggert filed for the sum of $1198 alleged to be due him for services as a pilot. Perhaps if a court case file can be located, it will describe the nature of his services in greater detail.

In summary, it is always helpful to collaborate with others in your genealogical pursuits.