A love letter is a sweet thing to discover in your family treasure chest.  We were extremely fortunate to rediscover a couple of love letters on our recent visits to Nevada and Colorado.

Here are some images of a love letter that was written on April 14, 1909 from John Arthur Fitzpatrick to Vesta Price: 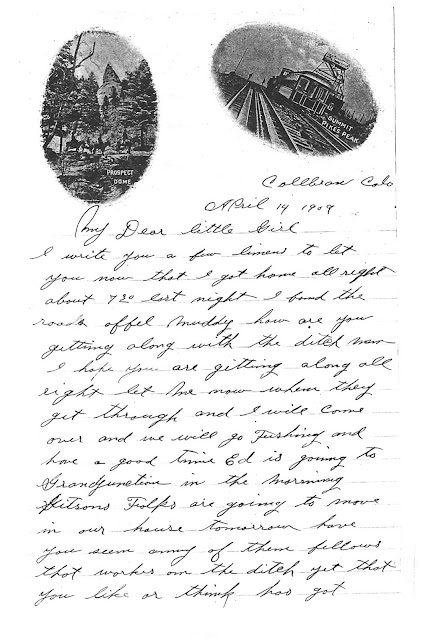 Transciption by Nick Cimino, July 2017
[Punctuation, spelling and capitalization have been added for reading clarity.]

I write you a few lines to let you know that I got home all right about 7:30 last night.  I found the roads offel [awful] muddy. How are you gitting [sic] along with the ditch men?  I hope you are gitting along all right.  Let me know when they git through and I will come over and we will go fishing and have a good time. Ed is going to Grand Junction in the morning. Gitsons Folks are going to move in our house tomorrow. Have you seen any of them fellows that works on the ditch yet that you like or think has got...

The thing that impresses me about the first page of the letter was that he was really concerned about those ditch men stealing his girl!  The "offel muddy" roads are a testament to the difficulty of driving a wagon over unpaved roads in the spring time over one hundred years ago. Ed is his brother. He places a date here on when the Gitson family moved into his parents' house. 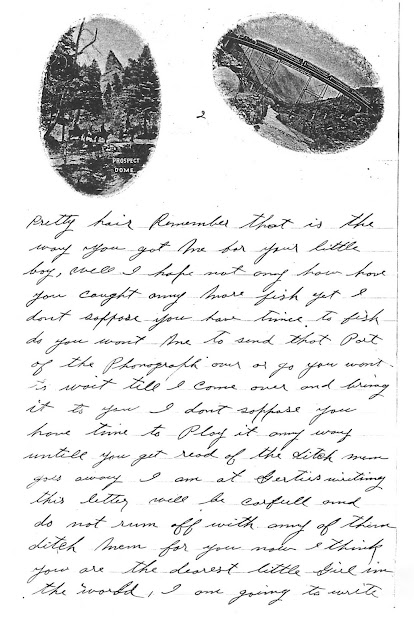 ...pretty hair. Remember that is the way you got me for your little boy, well I hope not. Any how have you caught any more fish yet? I don't suppose you have time to fish. Do you want me to send that part of the phonograph over or [do] you want to wait till I come over and bring it to you? I don't suppose you have time to play it any way untill [sic] you get [rid] of the ditch men goes away. I am at Gertie's writing this letter. Well be [careful] and do not run off with any of them ditch men for you [know] I think you are the dearest little girl in the world. I am going to write...

Watch out for those ditch men with pretty hair! Vesta and Art must have enjoyed listening to phonograph records of the day. What do you think would be their favorite tunes in 1909?  Apparently he is staying with his sister Gertie and her husband "E.J. "Joe" Ludlam in Collbran. 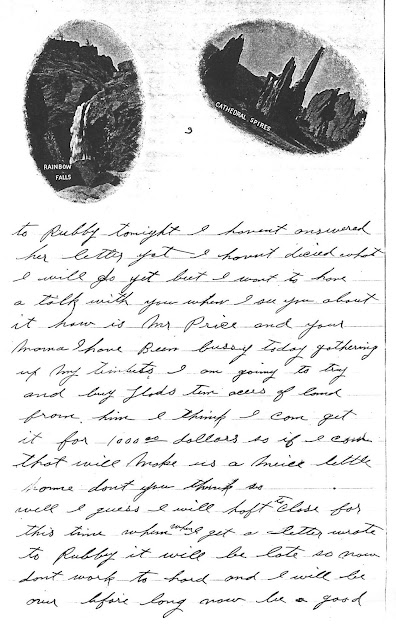 ...to [Ruby] tonight. I haven't answered her letter yet. I haven't [decided] what I will do yet but I want to have a talk with you when I see you about it. How is Mr. Price and your mama? I have been [busy] today gathering up my trinkets. I am going to try and buy [Lloyd's] ten acres of land from him.  I think I can get it for $1,000.00 dollars. So if I could that will make us a nice little home don't you think so? Well I guess I will haft to close for this time. When I get a letter wrote to [Ruby] it will be late so now don't work to hard and I will be over before long. Now be a good...

Ruby was Arthur's sister. Vesta's parents were Thomas Price and Flora Hill Price. The land that he is proposing to buy was owned by his brother Lloyd.  The price of $100 per acre is a good deal. Newspaper advertisements show land for sale in Collbran for $125 to $150 per acre.  This is probably the same property that we showed in last week's blog post. 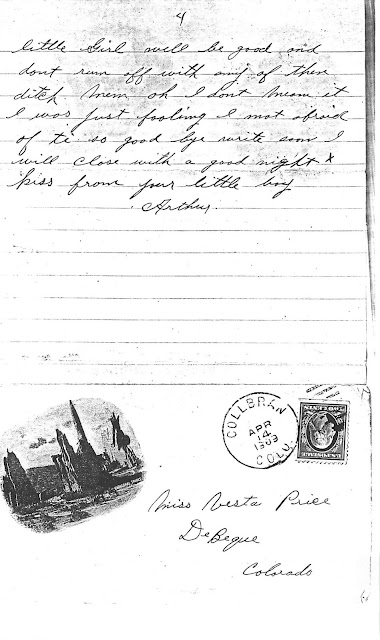 ...little girl. Well be good and don't run off with any of them ditch men. Oh I don't mean it. I was just fooling. [I'm not] afraid of [it]. So good bye. Write soon. I will close with a good night X kiss from your little boy.

He was sure having a lot of fun teasing her about those ditch diggers stealing his gal.

So here is a picture of Arthur and Vesta after their wedding in 1910.  Do you think he has pretty hair? 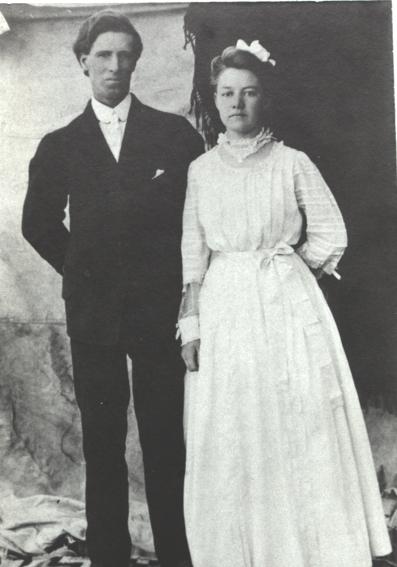 The area where the Thomas Price family lived near Debeque, Colorado is known as the Blue Stone Valley or the Bonita Valley.

The following brief history was published in the 2009 Debeque Plan and was taken in part from "Cattle & Shale-A Story of Roan Creek and DeBeque" (1884-1984), compiled and edited by Sarah Prather.

DeBeque "was discovered" by Dr. W.A.E. DeBeque and his companions in 1884 while searching for a suitable place for a stock ranch. The value of the area for raising livestock as well as excellent year-round hunting grounds quickly became widely known. By 1888, 31 ranches were actively operating with several hundred head of cattle.

Connection to the outside world began with a stage line running from Grand Junction through DeBeque to Aspen. This was soon replaced by a toll road and eventually by the Midland railroad in 1886. Settlement in the large, open valley on the south side of the river soon followed, and it was named the Bluestone Valley and also known as the Bonita Valley. The Bluestone Ditch was built in the mid-1890s to divert water from the Colorado River for this valley. DeBeque was formally incorporated in 1890, and the population began to grow with the advent of local retail businesses, increased ranching, and expansion of railroad operations.

The Palisade Tribune, Volume 6, Number 32, January 2, 1909 reports that Willie Sullivan, a Fruita boy whom most of us think of as a school boy, was this week elected superintendent of the Blue Stone Ditch at DeBeque. His salary is $1000 per year-- Fruita Mail

Perhaps this is the man who sent all those pesky ditch men into Vesta's neighborhood!