The Slaves That Freed Themselves, Part 2

The Slaves That Freed Themselves, Part 2

In Part 1, we told the story of the first major contraband camp of the Civil War at Hampton, Virginia outside the walls of Fort Monroe also known as “Freedom’s Fortress”.  The Grand Contraband Camp grew to become a city in the early years of the Civil War with a population estimated between 7,000 and 10,000 people.  Another example of a contraband camp was the Freedmen's Colony of Roanoke Island, where 3500 former slaves worked to develop a self-sufficient community.  In my research on the slaves that freed themselves in the early years of the civil war, I discovered a website dedicated to sharing the history of Civil War Contraband Camps: Last Road to Freedom.  The following quote from the website explains the varying forms taken by contraband camps:

“Contraband camps took different forms in different places. For instance, while in Memphis camps were created, often from the ground up, along or in [islands of] the Mississippi River, in South Carolina many camps existed on the same plantations where blacks had been slaves. Still other camps simply consisted of a number of blacks resident at Union encampments. Especially in the case of newly-built camps, the populations were ever-changing since fugitives arrived daily, men were recruited into service, and women were often sent to work on abandoned farms or plantations. Some of what is known about these makeshift communities comes from official records while important details have been provided through the writings of various people—often associated with religious groups or benevolent organizations--who visited them. The most remarkable of these first-hand accounts is provided by Quaker Levi Coffin, who transitioned from his work on the Underground Railroad directly to fundraising for the contraband. Two other witnesses to camp life were Michigan Quaker and Underground Railroad operative Laura Haviland, and John Eaton, Jr. General Superintendent of Freedmen.”

Gen. Ulysses S. Grant assigned John Eaton, an ordained Presbyterian minister, to organize contraband camps for the runaway slaves that were flocking to the protection of his army of the western theater. Grant had employed the contrabands as teamsters, laundresses, cooks, and hospital assistants. As the numbers of escaped slaves grew into the thousands, a more permanent solution was required. Grant approved the idea of a refugee camp at Grand Junction, Tennessee, and appointed Chaplain John Eaton, Jr., of the 27th Ohio Infantry, to oversee its organization and operations in November 1862.  Eaton was assigned the title of General Superintendent of Contrabands the following month. Eaton's first challenge was to provide food, shelter, clothing and security for the refugees throughout the Mississippi Valley. By 1863, he had received a commission as colonel of the 63rd United States Colored Infantry Regiment. Later he was appointed assistant superintendent of a district for the Freedman’s Bureau, which he held until his resignation in 1865. 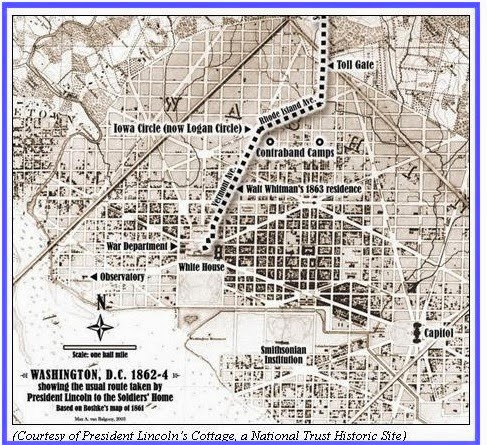 It appears that most major cities behind Union lines had contraband camps as is shown in this map of Washington, D.C.  There is information on the internet about some of these sites but the heavy lifting will be done by scholars and genealogists in the federal records at the National Archives in Washington, D.C.  The place to start will be in the records of the Freedmen's Bureau (Record Group 105) and related military records.  The Last Road to Freedom website is starting this process by extracting the lists of settlers in the contraband camps.  An example of a list of camp settlers is here.

The federal government became integrally involved with the lives of African Americans during the Civil War and Reconstruction period.  This involvement was principally managed by the Army and the Navy during the War. It is estimated that approximately four million slaves became freedmen through a variety of federal laws and presidential proclamations culminated by the Thirteenth Amendment to the Constitution.  The federal government established an agency in 1866 to assist the newly freed men, women and children which is usually called the Freedmen's Bureau.  The formal name of this agency was the Bureau of Refugees, Freedmen, and Abandoned Lands.  This more formal name is somewhat more explanatory of their role.  Feeding the refugees, educating the freedmen and employing freed people on the abandoned lands were all included in their duties.  The Freedmen’s Bureau inherited many of the records associated with the contraband camps but some of the records remain in military files.    An overview of the Freedmen’s Bureau records can be found here.

The following two paragraphs extracted from the National Archives site above encapsulate the potential for indentifying the occupants of the contraband camps:

“Of all of the types of records listed in the appendixes to the three-part inventory of records of the bureau field offices, the "pre-bureau" records are particularly valuable for research on African Americans during the Civil War. Because there was no centralized agency such as the Freedmen's Bureau during the war, records for this period are not as plentiful and are more difficult to locate, but they do show how the federal government became involved with freedmen and why the bureau was established. As soon as the war commenced, slaves fled to Union lines or were abandoned by their fleeing masters. Since most possessed little more than the clothes on their backs, the military began to dispense basic relief of food, clothing, and shelter and to employ as many as possible. In parts of the country where large numbers had gathered, commanders appointed superintendents to be in charge of all affairs relating to them. When Secretary of War Edwin Stanton appointed Oliver O. Howard to be commissioner of the bureau, he reportedly gave him a large basket of records of the superintendents of freedmen, and these, most likely, are the pre-bureau records in RG 105.

Although somewhat fragmentary, records of the wartime superintendents of freedmen, some of which begin as early as March 1862, show that the Freedmen's Bureau was in many respects but a continuation of operations that had started during the war. The most voluminous records are those of the general superintendent of freedmen in the military Department of Tennessee among the bureau records for Mississippi and those of the superintendent of the Bureau of Free Labor in the military Department of the Gulf among the bureau records for Louisiana. For both states there are records of "home colonies" and camps where freedmen were put to work cultivating abandoned plantations. Registers kept at these places give the names and ages of the freedmen employed and often the names and addresses of former owners. Other registers show the dispensation of relief or the people treated in hospitals. Less voluminous, but also significant, are bureau records for South Carolina and Virginia, which include those of the superintendent of contrabands at Beaufort in the military Department of the South and the superintendent of Negro affairs at Fort Monroe in the Departments of Virginia and North Carolina. Bureau records for the District of Columbia also include registers of freedmen's camps, one in the city and the other on Mason's Island, that were established during the war and copies of letters sent by the quartermaster officer in charge of freedmen in the military Department of Washington.”

The potential that these records hold for African American history and genealogy is enormous.  Next time we will summarize the story of the “Volunteers of African Descent” and the rich records of the pension files at the National Archives.  Stay tuned!