The Slaves That Freed Themselves, Part 3

The Slaves That Freed Themselves, Part 3

The Contraband Camps described in Part 1 and Part 2 grew even larger after Abraham Lincoln issued the Emancipation Proclamation on January 1, 1863.  The draft of the Emancipation Proclamation that was issued in the fall of 1862 did not include the provisions for the recruitment of African Americans into the military.  Abraham Lincoln at first was not convinced of the necessity for black troops.  The exodus from the plantations resulted in an excess of fugitive slaves within Union lines.  This fact coupled with the shortage of white Union manpower led to Lincoln’s decision to encourage the exodus further and put the refugees to work in the Union army.

The United States War Department issued General Order Number 143 on May 22, 1863, establishing the Bureau of Colored Troops to facilitate the recruitment of African-American soldiers to fight for the Union Army.  Regiments, including infantry, cavalry, engineers, light artillery, and heavy artillery units, were recruited from all states of the Union and became known as the United States Colored Troops (USCT).
Historian Steven Hahn proposes that when slaves organized themselves and worked with the Union Army during the American Civil War, including as some regiments of the USCT, their actions comprised a slave rebellion that dwarfed all others. 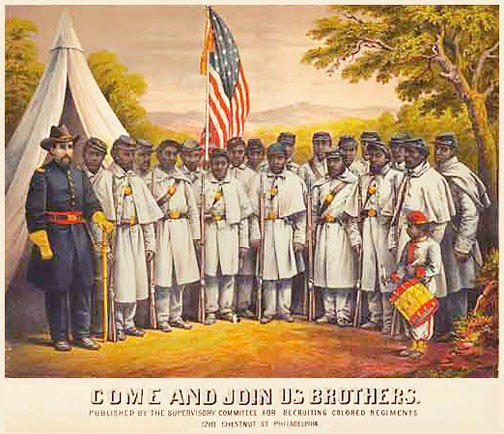 Approximately 175 regiments composed of more than 178,000 free blacks and freedmen served during the last two years of the war. Their service bolstered the Union war effort at a critical time. By war's end, the men of the USCT composed nearly one tenth of all Union troops. The USCT suffered 2,751 combat casualties during the war, and 68,178 losses from all causes. Disease caused the most fatalities for all troops, black and white.[Wikipedia, Article United States Colored Troops]

The numbers of troops recruited in the south came primarily from the contraband camps.  One exception is Texas as there was not a strong Union presence in Texas until the end of the war.

The soldiers are classified by the state where they were enrolled; Northern states often sent agents to enroll ex-slaves from the South. Note that many soldiers from Delaware, DC, Kentucky, Missouri and West Virginia were ex-slaves as well.
Source: Wikipedia

The good news for African American genealogists is that the service records and the pension files for these veterans are gold mines of family information.  Consider the case of Eliza Davis who was married to two veterans.  The pension file of her second husband, Lewis Mackel was over 200 pages and included genealogical gems such as this one:

GENERAL AFFIDAVIT State of Mississippi, County of Adams:  In the matter of Pension claim of Eliza Davis now Mackel, late widow of Wm. Davis, late Co. H. 63rd USCT.
Personally came before me a Justice of the peace in and for aforesaid County and State William Shorter, aged 73 years, citizen near Bullits Bayou, County of Concordia, State of Louisiana, well known to me to be reputable and entitled to credit and who being duly sworn, declares in relation to aforesaid case as follows:
I am a minister of the gospel and have been for 45 years and I joined in the Holy Bonds of Matrimony one Eliza Davis and Lewis Mackel at the Morgan plantation in Concordia Parish, Louisiana on the 7th day of November 1869 and I know the said Eliza Davis to be the widow of the above named soldier William Davis who is now dead.     Signed- William Shorter.

Lewis Mackel was working as a constable in Concordia Parish, Louisiana after the war but he was also a veteran of Company H of the 63rd Regiment of the United States Colored Troops.  The original name of this regiment was the 9th Louisiana Infantry (African Descent).  The index card for the pension file was found on Ancestry.com and it opened the door to an explosion of information about the life of Lewis Mackel.  Here is another example:

p. 23      Deposition by Benjamin Thornton states:
“…his age is more than 50 years, a drayman, residence and P.O. address Natchez, Mississippi.  I have been acquainted with Louis Mackel for a good many years.  We both formerly lived near Bullits Bayou, Concordia Parish, La. when Louis was first a magistrate and later a constable.  While a constable he was sent to serve an attachment on some mules belonging to a woman named Ann Walker.  Willie Nulty in some way or for some reason unknown to me shot Louis Mackel in the face.  I was not present and did not see the difficulty and don’t know how it started but I have always understood that he, Louis was in the discharge of his official duties when shot.  I did not see him at all the day he was shot.”  Sworn 13 August 1902

To find a dramatic story like this about your ancestor is both amazing and intriguing.  Further indexing of the records of the Freedmen’s Bureau and of these federal pension files will open the door to thousands of similar dramatic stories.  Publishing stories such as this one will also help to open the doors of discovery.  If you are interested in learning more about how to research your African American ancestors, please contact me or attend one of the following classes:

The African American Genealogy Class sponsored by the Bay Area Genealogical Society will meet on the 1st Thursdays at 10:30 AM at Friendswood Public Library on the following dates:

The address of the Friendswood Library is 416 S. Friendswood Drive.  This road is also known as FM-518.

I am going to cover the following topics:

A 45 minute overview of the above topics will be held  on Saturday, September 6, 2014 at the Bayland Community Center, 6400 Bissonnet Street Houston, Texas 77074.  This session is being sponsored by the Houston Genealogical Forum.
Posted by Nick Cimino at 6:12 AM