Many families have an oral tradition about Native American heritage.  Proving that heritage can often be very challenging.  My father-in-law told me many stories about his Choctaw grandmother.  Her birth name was Margaret Garvin.  When she was born on July 27, 1866, in Conway County, Arkansas, her father, James Wiley Garvin, was 54 and her mother, Lydia Moss, was 46. She was married three times and had two sons and six daughters between 1886 and 1911. She died on January 30, 1927, in Krebs, Pittsburg County, Oklahoma, at the age of 60, and was buried in Red Oak Cemetery, Bache, Pittsburg County, Oklahoma.

Margaret Garvin witnessed tremendous changes that occurred in the Choctaw Nation of Indian Territory and fortunately I have been able to find many documents and images of her life.  I have transcribed many of those documents into a chronological record as follows:

MARRIAGE: 1886; Marriage certificate of Gillium Jefferson; This is to certify that I did on this 8th day of February 1886, unite in marriage Mr. Gillium Jefferson and Miss Margaret Garvin in accordance with law and custom; W. H. James, Minister of the Gospel; I hereby certify that this is a true and correct copy of the original as handed me for Record and Recorded this 5th day of April 1886, E.R. Cheadle, Clerk; Source: Pittsburg County Genealogical and Historical Society, site visit August 2004; The Dawes Case File for Margaret Phebus has a letter which states that Margaret and Gillum Jefferson were married on 13 Feb 1886 but I am still using the 8 Feb 1886 date for their marriage as the Marriage Certificate is a better source.

DIVORCE: Before 1898; Case #1772 from Index in Pittsburg Co. Courthouse; Margaret Welch vs. James Welch recorded 1897; Pittsburg Co. Court Clerk could not find it on their microfilm when we checked on August 3, 2004. This may not be the right case anyway since the names don't exactly match. ===== In the Dawes case file for Margaret Phebus, page 10 states that when William Welch deserted her, she "procured a divorce from him in the United States Court at South McAlester in the Central District of the Indian Territory.

RESIDENCE: 1896 in the Dawes case for Sally Welch on page 7, the affidavit of Margaret Phebus states that William Welch deserted her in the year 1896.

LAND: 1904-1907; Margaret Phebus was granted Homestead Patent No. 23386 Choctaw by intermarriage Roll No. 1268; Date of Certificate: December 30, 1904. The Choctaw and Chickasaw Nations grant and convey the following described land:  The North Half of the South West Quarter and the North half of the South East Quarter of the South West Quarter of Section Nine (9), Township Five (5) North and Range Sixteen (16) East, (Choctaw Nation), of the Indian Base and Meridian in Indian Territory, containing One Hundred (100) acres. Signed Sep 25 1907 by Green McCurtain, Principal Chief of the Choctaw Nation and signed Oct 1, 1907 By Douglas H. Johnston, Governor of the Chickasaw Nation. Index to Choctaw-Chickasaw Deeds and Allotments (Hastain, 1908); Supplement to Index of Choctaw-Chickasaw Deeds and Allotments (Hastain, 1910); The significance of these early plat maps and indexes to land grants in eastern Oklahoma is still apparent today. These cartographic products provided a quick and factual reference to the original owners of these lands in Indian Territory. The documents were used by abstract and title firms, the legal profession, county clerks, the various administrative offices of the Creek, Seminole, Cherokee, Choctaw and Chickasaw tribes, land investors and speculators, and even the Bureau of Indian Affairs (BIA). The Indian tribal rolls and censuses, land grants. various other Indian records, and the USGS base maps upon which the original allotments had been annotated, were all available in the office of the Commissioner to the Five Civilized Tribes in Muskogee. The compilations and maps by the Indian Territory Map company, Eddie Hastain and J. Reed Moore were apparently based upon these original source materials. The landownership atlases by Hastain and Moore were reasonably priced and small enough in size to be easily carried in one's pocket for general reference purposes. those interested in land investment opportunities whether for farming, industrial purposes or potential areas for coal, oil and gas fields, were the major purchasers of these publications. These cartographic representations continue to be the best and easiest use for locating the original landownership titles and for historical research in eastern Oklahoma.

CENSUS: 1910 with her husband William Phebus in Dow Twp., Pittsburg Co., Oklahoma; see his notes for full transcript of record.


NEWSPAPER: 1920; Oklahoma Miner, Krebs, OK; 26 Aug 1920, p. 3; Local News: Mrs. Wm Phebus is on the sick list.
BIOGRAPHY: The following information was received from the National Archives, Ft. Worth branch based on the Dawes Roll No. I.W. (Intermarried White) 1268: Choctaw Nation. Choctaw Roll. Field No. 5870, Residence: Tobucksy County. Post Office: Carbon, I.T. Age: 35. Blood: I.W. Father: Wiley Garvin, Deceased Non-Citizen. Mother: Liddy Garvin, Enrollment in Gaines County. Margaret Phebus was denied by C.C.C.C. Case #60M 26 Apr 1904 but on further consideration this judgement was reformed 22 Nov 1904. She was admitted as an Intermarried Citizen as "Margaret Phebus or Margaret Welch" by C.C.C.C. Case #60M by judgement 22 Nov 1904. Margaret was admitted on the 1896 citizenship roll in Case #988. She was also admitted by the U.S. Court at South McAlester on 25 Aug 1897 in Case #187 as Margaret Welch. See her testimony as to her residence and the birth of her child as to her parents see her testimony and that of Wiley Garvin. She is now the wife of W.M. Phebus a non citizen as of 24 Dec 1902. Sallie Welch, daughter of Margaret is on Choctaw Roll #426. Margaret was transferred from Choctaw card #4650 on 5 Dec 1904. Enrollment of Margaret approved by the Secretary of the Interior on 30 Dec 1904. Date of application for enrollment was 6 Sep 1899. Date of transfer to this card was 5 Dec 1904.

BIOGRAPHY: Choctaw 4650 Muskogee, Indian Territory, January 16, 1904 Harley & Lewis Attorneys at Law South McAlester, Indian Territory Gentlemen: Receipt is hereby acknowledged of your letter of January 11, asking if the names of Margaret Phoebus (sic) and Emeline and Phoebe Jefferson have been finally approved so that they can now take their allotments. In reply to your letter you are advised that it appears from our records that Margaret Phebus was admitted to citizenship in the Choctaw Nation by a judgement of the United States Court for the Central District of the Indian Territory, rendered at South McAlester, August 27, 1897, in court case, citizenship docket, Number 187. Under the provisions of the act of Congress of July 1, 1902, the Commission is prohibited from enrolling or making any allotment to any persons whose citizenship is dependent upon judgments of the United States Courts in Indian Territory, until their final right to Choctaw and Chickasaw citizenship has been determined. You are further advised that Phoebe and Emeline Jefferson have been listed for enrollment as citizens by blood of the Choctaw Nation, having been identified from the 1896 census roll of the Choctaw Nation, Tobucksy County but their names have not yet been place upon the schedules of citizens by blood of said nation prepared for forwarding to the Secretary of the Interior. They would not therefore, be permitted to make selection of allotment at this time. Respectfully, Chairman

BIOGRAPHY: Commission to the Five Civilized Tribes, South McAlester, Indian Ter. In the enrollment of Margaret Febus (sic) and children as Choctaws; being sworn and examined by Com'r McKennon she states:
Q What is your name? A Margaret Febus.
Q How old are you? A Thirty-five.
Q Where have you been living? A Down here the other side of Cherryville.
Q How long? A Ever since I have married, thirteen years ago.
Q All the while? A Yes sir.
Q When were you married to Mr. Febus? A One year ago; my first man was Jefferson.
Q What was your name when you made application to the Dawes Commission? A Welch
Q What was the date of your marriage to Mr. Febus? A August 28th of last year.
Q You have one child born since that time? A Yes sir.
Q What is its name? A Laura E. Febus, who born January 8th 1899. I have got three more children; one named Emiline Jefferson, thirteen years old, and Phoebe Jefferson, eleven years old.
Q They are not included in this judgement? A No sir, but these two children of Jefferson's was enrolled and drawed money when they paid the last time.
Q Was he a Choctaw citizen? A Yes sir.
Q Welch wasn't a citizen? A No sir.
Q The Welch child wasn't included in this judgement? A No sir. Com'r McKennon: Enrollment of Sallie Welch is refused, because it is not in the judgement. (Estimated date of this document is 1899 by Nick Cimino)

BIOGRAPHY: Commission to the Five Civilized Tribes, South McAlester, Indian Ter. In the enrollment of Phoebe and Emeline Jefferson, children of Margaret Febus as Choctaws; being sworn and examined by Com'r McKennon she testifies as follows:
Q What is your name? A Margaret Febus.
Q How old are you? A Thirty-five.
Q What was Phoebe's and Emeline's father's name? A Martin Gillum Jefferson.
Q Were you married to him? A Yes sir, under the Choctaw law, the other side of Krebs, in the Choctaw Nation.
Q Who married you? A Holston James, a Chickasaw Indian preacher. I lived with him until he died, and I put him away.
--- Wiley A. Garvin being sworn and examined states:
Q What is your name? A Wiley A. Garvin.
Q How old are you? A Forty-four.
Q Are you a brother of Margaret Febus? A Yes sir.
Q Were you present when she was married to Mr. Martin Gillum Jefferson? A  Yes sir, I saw them married in the Choctaw Nation.
Q By whom? A Holston James, a Minister of the Gospel. (Estimated date of this document is 1899 by Nick Cimino)

BIOGRAPHY: Harold Harrington, telecom, 19 Feb 1994 Margaret was going to go to California. She had a relative out there who was sending her money and then the money stopped when she was in Carbon, IT. She was splitting rails to earn money. Bill Phebus happened along and helped her split rails. He was working in the mines at the time.

OBITUARY: McAlester News-Capital, Thursday, February 3, 1927; MRS. PHOEBUS (sic) IS BURIED Funeral services for Mrs. W.M. Phoebus who died at her home in Krebs Sunday morning were held from the home Wednesday afternoon at 2:30 o'clock, interment in the Red Oak cemetery. Mrs. Phoebus had been a resident of Krebs for more than 20 years. She is survived by the husband and eight children, namely Mrs. Troy Woods of Wayne, Okla., Mrs. Jacob James of Hartshorne, Mrs. Eli Wade of Carbon, Mrs. A.F. Grisley of Holiday Cove, West Virginia, Miss Lydia Phoebus and Bill Phoebus both of Krebs, Mrs. Truman Harrington of Cambria and Bud Phoebus of Krebs.

Margaret Garvin was married to three men, Martin Gillium Jefferson, William W. Welch and William Morris Phebus.  The testimony in the court cases for the Dawes Commission and its predecessors are a fascinating record of the life of Margaret Garvin.  It appears that the predecessors to the Dawes Commission had granted Margaret membership in the Choctaw tribe but then she was deprived of that membership in the later trials.  She was admitted to the Choctaw rolls as an Intermarried White.  This helped her to obtain her land claim but has prevented her descendants from claiming membership in the Choctaw tribe.

It was clear that she continued to think of herself as a Choctaw as can be seen from the records below from the 1910 census.  She appears with her family on line 22 in the first image.  The Special Inquiry related to Indians shows that she claimed to be 1/8 Choctaw.  We plan to get Margaret's descendants DNA tested to see if there is any detectable presence of Native American ancestry.  We will keep you posted on the DNA results. 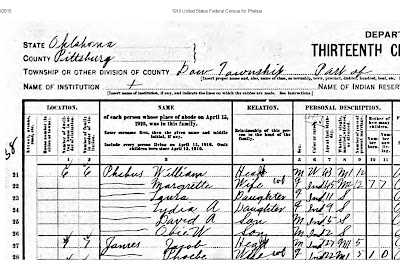 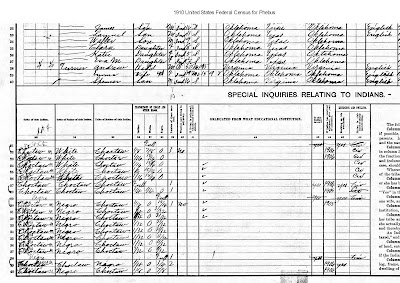