Behind the Scenes at Genealogy Roadshow

It has been a week since Genealogy Roadshow completed the filming of the Houston episode on Sunday, November 22. The air date is yet to be determined, but it will be sometime in May or June of 2016.  I had the good fortune to be behind the scenes as the Genealogy Roadshow was being taped last week.  It gave me the opportunity to meet and interview one of the people that will be featured in this episode.

Sarah Lasater became interested in the Genealogy Roadshow after she saw a Facebook posting by a friend from college.  Her friend had submitted a query about her African American family history and Sarah became intrigued by the possibility of submitting her own story.  She had been interested in her family roots for several years.  She built a family tree at Ancestry.com and compiled files from her home and family followed by more research.

Sarah's friend put the idea in her mind to submit some of her own family stories.  She went to the Genealogy Roadshow website and  submitted five questions that she had on various ancestors on her family tree in February 2015.  She did not hear anything for a couple months until she was contacted by a researcher from the show who wanted to pursue preliminary research.

Two months ago she was contacted again by the researcher and notified that they wanted her to appear on the show.  Her grandfather told her that there might be a connection to to an illustrious Texas veteran on one of the branches of the family tree.  Her grandfather knew that the family had resided in the vicinity of Eastland County, Texas where he was born.  Her great grandfather had died young so her grandfather was unable to learn much about his father’s family history.  Sarah’s grandfather passed away in 2011. She wanted to verify her ancestral connections.   We will have to wait until the 2016 season of the Genealogy Roadshow to find the answer to Sarah's question. 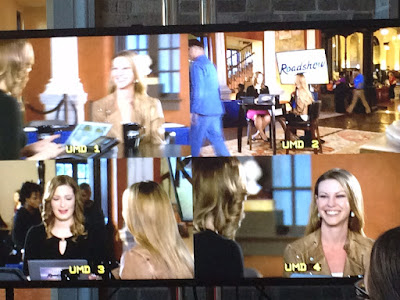 To complicate matters Sarah got sick and was in the hospital until 3:30 PM Saturday.  The production crew had hoped to do additional filming with Sarah on Saturday.   She had nothing but compliments for the staff of the Genealogy Roadshow and was amazed that they would send a car to Victoria, Texas to pick her up on Saturday night and provide her with a hotel in Houston that night.  She has the highest regard for the whole production team.  The experience was great from the moment she found out that the Roadshow was interested in her story.  All of the Roadshow staff were very kind, generous and approachable.


Sarah also found all of the booths in the Exhibit Hall to be very informative.  She is intrigued by the possibility that she might be eligible to join one or more of the lineage societies.  She had fantastic conversations and she is hoping to explore more about her ancestral connections.  She was so excited to be one of few chosen from thousands of applicants.  All in all, she had a great time!  And so did I! I can't wait to see the finished episode when the new season of Genealogy Roadshow debuts in May 2016. 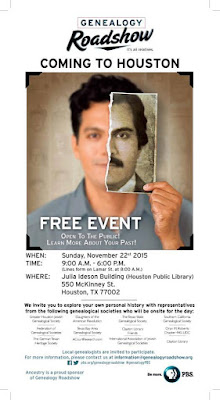