I am a poor cousin to the Rockefeller family!  I never knew about this connection as a child.  My mom had stories about being related to famous people but I never heard my dad tell any of those kinds of stories.  It wasn't until I started working on our family history in 1989 that I was able to find out that we are related to one of the richest families in America.

The Rockefeller name is well known to most Americans.  John D. Rockefeller, Sr. made his fortune in the oil business with Standard Oil Company.  John D. Rockefeller, Jr. was instrumental in the construction of Rockefeller Center in New York.  The complex is a dining and shopping mecca in Midtown Manhattan. The Art Deco skyscraper in the center of Rockefeller Center known to most people as "30 Rock" houses the studios of NBC television and the plaza plays host to broadcasts of the Today Show every weekday morning.  The Rockefeller Family includes oil tycoons, governors, industrialists, philanthropists and a vice president.

One of the Rockefeller accomplishments that has been closest to my heart is Colonial Williamsburg. This city is a living history museum that provides a snap shot into the lives of our colonial ancestors. Every genealogist and history buff should put Williamsburg on their bucket list.  This historic treasure was preserved thanks to my fourth cousin, three generations removed, John D. Rockefeller, Jr. 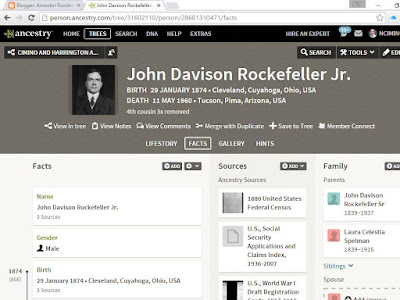 I found out that I have a lot in common with my Rockefeller cousin.  For example, he had a Social Security number and so do I!

I even have one up on Mr. Rockefeller.  He had to sign up for the draft.  The draft ended the year I became eligible.


It is definitely good for a laugh to say that I am related to the Rockefellers.  At the Texas State Genealogical Society meeting, we heard fellow professional genealogist, Cari Taplin tell her family story of being related to Roy Rogers.  I won't spoil the surprise ending to her story but I will tip my hat to her for inspiring this blogpost.  Happy trails!  Until we meet again!
Posted by Nick Cimino at 9:24 AM