"Finding the Roots of Your Family Legends" was one of the presentations by D. Joshua Taylor that I attended on Saturday at Rice University.  Josh is one of the hosts of the popular Genealogy Roadshow reality series on PBS.  The end of his seminar was greeted with a standing ovation from the Houston genealogy community.  He recommended that we develop historical context for family legends through newspapers and local history publications.

I am wondering if South Sioux City, Nebraska had a newspaper in the late 1920s or early 1930s.  I am trying to verify a family legend about bootleg wine.  For a few facts about prohibition, check out this link: http://winefolly.com/update/prohibition-facts/

My dad told me a story about his grandfather, Tony Cimino making wine during Prohibition. Enacted in January 1919, the 18th amendment to the U.S. Constitution prohibited the manufacture, sale or transportation of intoxicating liquors. Prohibition lasted from 1920 to 1933.

My great grandfather, Tony Cimino had been making his own wine since he had come to the United States and settled in Omaha, Nebraska in 1909. Tony moved his family to Sioux City, Iowa in 1912 and then across the river to South Sioux City, Nebraska in 1920. According to the story my dad told, Tony decided that it would be wiser not to store the wine in the house any more.  He went out to the field near his house and buried his gallon jugs of wine. Apparently a neighbor must have reported him.  The Sheriff arrived at the house with a team of horses and a plow.

This event occurred after my Grandpa Dick started working in Sioux City at the packing plant in 1926. In 1930 the Cimino families lived on West Frederick Street in South Sioux City.  My great grandfather's home address changed to  618 West 17th Street but they never moved.  The street name was changed sometime between 1930 and 1940.

The streetcar line from Sioux City, Iowa to South Sioux City, Nebraska was about 5 or 6 blocks from the house.  Tony had apparently buried a lot of jugs because Dick could smell the wine as soon as he got off the streetcar.

According to some sources, home wine making was legal during prohibition but apparently not in Nebraska:

"...in 1916 Nebraska voters approved a statewide prohibition amendment. Prohibition passed in Nebraska almost simultaneously with limited woman suffrage, and with the full support of the Nebraska Woman Suffrage Association. By law, there would be no more booze when the law formally went into effect in 1917."  SOURCE: NebraskaStudies.org

I sent an inquiry to the South Sioux City Library asking if it is possible to borrow their newspaper microfilm through interlibrary loan.

I also asked if they have any local history books or manuscripts that might include stories about the prohibition period in South Sioux City.

It would really be fun if I could verify this story.

Apparently his bootlegging was not serious enough to prevent him from becoming a citizen in 1930.

The Cimino Family first settled in Omaha, Nebraska with other immigrants from Carlentini and Lentini in the Siracusa province of Sicily.  The Omaha newspapers at GenealogyBank.com provide us with this wonderful story of an Omaha winemaker in 1970. 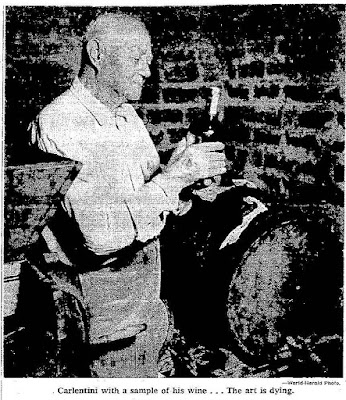 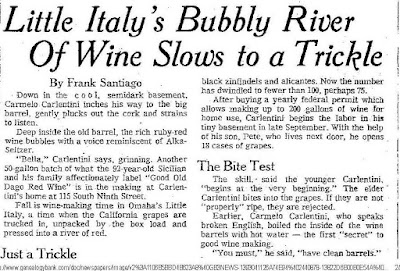 If you would like help researching your family legends, please contact me.
Posted by Nick Cimino at 8:01 AM