Thurgood's Grandpa was a Buffalo Soldier in TX

Famous people fascinate us. Does their family history help to explain how they were able to achieve great things? The lives of the rich and famous continue to capture our attention and our imagination. The history of the ancestors of Thurgood Marshall is woven into the fabric of our nation's history.

An episode in the legal career of Thurgood Marshall is featured in the movie, "Marshall" that is currently playing in theaters across the country. Last week we explored some of the facts and the fictions portrayed in that movie.  This week we take a peak at the back story which helped to form a crusading civil rights attorney and Supreme Court justice. 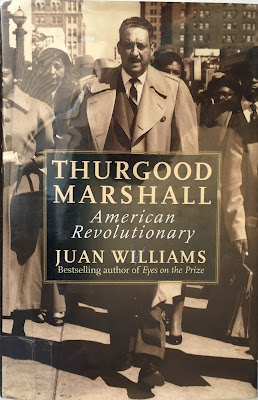 
"Any attempt to know Thurgood Marshall had to start with his family and his hometown. His defiance of segregation, his willingness to stand up to powerful whites and his insistence that he was the equal of any man were rooted in his Baltimore family."

One of the illustrations in the biography is this family tree for Thurgood Marshall: 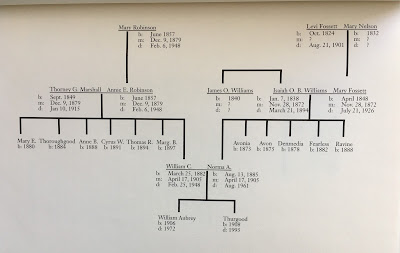 Juan Williams is not the only one interested in the genealogy of Justice Marshall. I created a profile for Thurgood Marshall so I could search for records about his genealogy.


Thurgood Marshall began working for the NAACP in 1936 but curiously the 1940 census lists his occupation as "lawyer-Social Services Dept."

Thurgood Marshall was the son of William C. Marshall and Norma A. Williams.  The 1918 Draft Card for William C. Marshall shows that he was working as a waiter on the railroad and living in Baltimore with his wife Norma at 1632 Division Street. Not shown on this card is the fact that William and Norma had two boys named Aubrey and Thurgood. 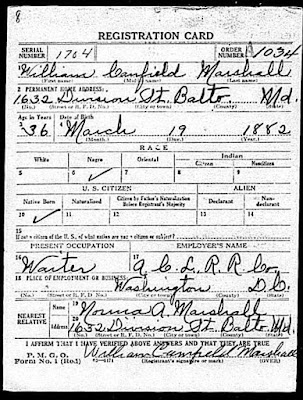 William Marshall, the waiter, followed in the footsteps of his father who is shown here in this list of Stockholders of the Lexington Savings Bank published in The Afro-American newspaper published 13 Jun 1896 in Baltimore. 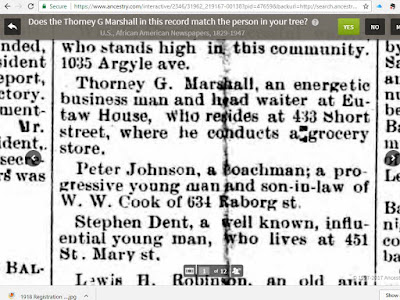 Thorney Good Marshall is the paternal grandfather and name sake of Thurgood Marshall.  Justice Marshall's birth name was originally Thoroughgood Marshall and he shortened it to Thurgood.  Thorney Marshall was also known as Thornton Marshall as shown in this record from the Baltimore City Directory.

Notice how the persons of African ancestry are denoted with an asterisk in the City Directory above.

The website for the Buffalo Soldiers Museum here in Houston states that the 24th Infantry was organized in 1869 after the consolidation of two other Black units, the 38th and 41st Infantry Regiments. For more than twenty years, the regiment occupied military posts in the southwest, protecting and maintaining peace on the turbulent frontier. In addition to battle engagements, the members of the regiment built roads, guarded stage stations, constructed and repaired telegraph lines, guarded waterholes, and escorted supply trains, survey parties, freight wagons and mail coaches, as well as performing scouting patrols.

The biography by Williams describes Thorney Marshall's military experience in detail [Page 20].  Fort Brown had a reputation as the "the most unhealthful and unpleasant U.S. Army outpost in the nation." Thorney's job was to ride shotgun for the paymaster as he traveled to various Army encampments on the Rio Grande every other month.  Thorney Marshall received praise from his superiors for his performance but he began to experience a series of illnesses culminating in "Chronic Hepatitis" which led to his medical discharge. After a period of recovery in Baltimore, he went back to work as a waiter and married his neighbor Annie Robinson in 1879.

One small part of the Thurgood Marshall story is that a Supreme Court justice was descended from a Buffalo Soldier that served in Texas. There are enough stories from the life and ancestors of Thurgood Marshall to make a thousand movies. If you have not seen the "Marshall" movie, please go see it and let me know what you think.