My grandfather's sister was Rose Cimino 1918-2004. She was married to Sam Ferraguti.  Sam's full name was Salvatore Silvio "Sam" Ferraguti and he was born on May 1, 1918, in Omaha, Nebraska. His father was Verardo Ferraguti and his mother was Elvira Settini. Sam Ferraguti married Rose Louise Cimino on June 18, 1937, in Papillion, Nebraska. They had four children in 16 years. He died on November 2, 2003, in his hometown at the age of 85.

Some of the most valuable documents for 20th century immigrants can be found in the naturalization paperwork.  For example, here is the Petition for Citizenship for Sam's father, Verardo Ferraguti. 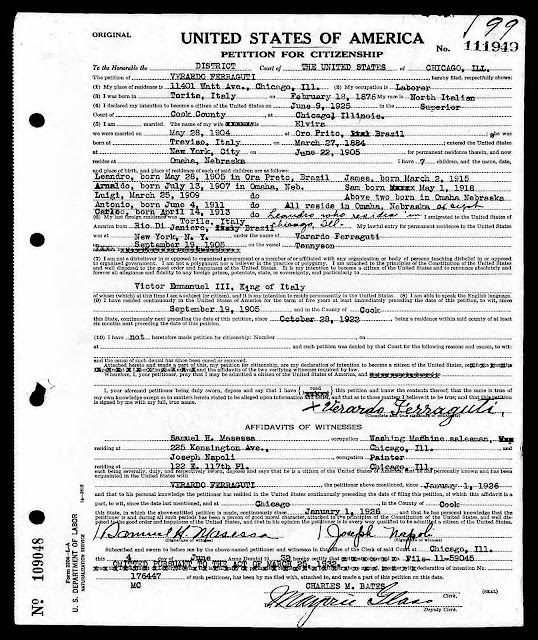 There are so many useful details on a Petition for Citizenship that I recommend that you make a full transcript.  Here is the transcript that I made for the above document:

ORIGINAL UNITED STATES OF AMERICA, PETITION FOR CITIZENSHIP No. 111949

To the Honorable the DISTRICT Court of THE UNITED STATES of CHICAGO, ILL.

(2) My occupation is Laborer.

[Spelling of surnames and place names in these documents is often questionable. This place name is further obscured by a typographical error placing a "t" in place of an "l." In another source I had recorded that Verardo was born in Parma, Italy.  I googled a list of the comunes or towns in the province of Parma and I found that the correct spelling should be Torrile.  Here is a link to the Wikipedia article about Torrile, Italy. https://en.wikipedia.org/wiki/Torrile ]

[According to Wikipedia, Torrile is a comune (municipality) in the Province of Parma in the Italian region Emilia-Romagna, located about 90 kilometres (56 mi) northwest of Bologna and about 13 kilometres (8 mi) north of Parma.]

My race is North Italian.

(4) I declared my intention to become a citizen of the United States on June 9, 1925 in the Superior Court of Cook County, at Chicago, Illinois.

(5) I am married. the name of my wife is Elvira [We know through other records that her maiden name was Settini.] We were married on May 28, 1904 at Oro Prito, Brazil.

[Here is another case of poor spelling.  The actual place name is Ouro Preto and here is the link to the Wikipedia article: https://en.wikipedia.org/wiki/Ouro_Preto. Ouro Preto was a gold mining town that is 475 kilometers north of Rio de Janeiro by an unlit winding road.]

She [Elvira Settini] was born at Treviso, Italy on March 27, 1884 and [she] entered the United States at New York, City on June 22, 1905 for permanent residence therein, and now resides at Omaha, Nebraska. https://en.wikipedia.org/wiki/Treviso

[According to Wikipedia, Treviso is a city and comune in the Veneto region of northern Italy. It is the capital of the province of Treviso]

(6) My last foreign residence was Torile [Torrile], Italy. I emigrated to the United States of America from Rio Di Janiero, Brazil. My lawful entry for permanent residence in the United States was at New York, N.Y. under the name Varardo [sic] Ferraguti on September 19, 1905, on the vessel Tennyson.

[I always find the following phrase disconcerting that so many Americans would have difficulty swearing to this today.]

(7) I am not a disbeliever in or opposed to organized government or a member of or affiliated with any organization or body of persons teaching disbelief in or opposed to organized government. I am not a polygamist nor a believer in the practice of polygamy. I am attached to the principles of the constitution of the United States and well disposed to the good order and happiness of the United States. It is my intention to become a citizen of the United States and to renounce absolutely and forever all allegiance and fidelity to any foreign prince, potentate, state or sovereignty, and particularly to Victor Emmanuel III, King of Italy of whom (which) at this time I am a subject (or citizen), and it is my intention to reside permanently in the United States.

(8) I am able to speak the English language.

(10) I have not heretofore made petition for citizenship.

I, your aforesaid petitioner being duly sworn, depose and say that I have read this petition and know the contents thereof; that the same is true of my own knowledge except as to matters herein stated to be alleged upon information and belief, and that as to those matters I believe it to be true; and this this petition is signed by me with my full, true name.

I will let you read the Affidavits of Witnesses on the original document. Their names and occupations were Samuel H. Masessa, a Washing Machine Salesman and Joseph Napoli, a painter.

This petition for Naturalization was signed and sworn to by the witnesses on the 4th day of June 1932 and it helped me to uncover several details of dates and places of birth and marriage for members of the Ferraguti family.