Genealogists need to document their own history. This article is a review of the past week.  I have so many contacts throughout the course of a week that it is easy to forget if I don't write it down.

We have a group that meets weekly on Zoom called Italians of Omaha, Carlentini and Beyond. If you are interested in joining our meetings, please contact me using the contact box in the right-hand column and I will send you a Zoom registration link.
Topic: Omaha, Carlentini and Beyond- Sicilian/Italian Genealogy, History and Culture
Description: Weekly Tuesday afternoon discussion group for people with Sicilian and Italian ancestry with a focus on genealogy and culture. Attendees register once and can attend any of the occurrences. Topics will include history and culture of the Sicilian and Italian families that immigrated to Omaha and Sioux City. The host of these sessions is Nick Cimino, genealogist and blogger at www.ancestorpuzzles.com.
The videos are on YouTube here:
https://www.youtube.com/channel/UCpxE7j1jtWOz-ZyuYaoM6IA
Click on the Videos tab to see the full list of videos posted by Mary K Lynch.
You can also go to the following link on Facebook and scroll down until you see the posts by Mary K Turco Lynch:
https://www.facebook.com/groups/401903144923559
Mary K posts all of the meetings to our Facebook group called Genealogy Research Carlentini Omaha Association.
Do you want to learn the basics of finding birth/death/marriage records for Italian cities, going all the way back to 1820? Then watch this week's video! We walked everyone through the process. We also looked at the trees of the Riggio family and the Di Carlo family. We learned that a town in Sicily, Melilli, also experienced chain migration to Connecticut, much like Carlentini and Omaha. We ended with a beautiful song played for us by Jeremy Garcia. You won't want to miss this one.
The Riggio family resided in the area around Hartford and New Britain, Connecticut but they were originally from Melilli in the Siracusa province of Sicily.

The Di Carlo family was from Santa Ninfa, in the Trapani province of Sicily. Santa Ninfa is very near Gibellina which is the hometown of many immigrants that came to Omaha. 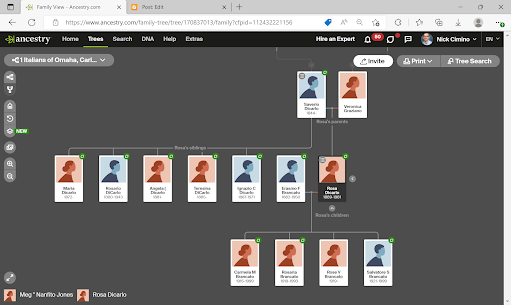 Thank you to Dean Battiato for sending me family group sheets for families of Lentini including Martinico, Maddalena, Ossino, and Inserra. We are in the process of adding ancestors for Donna Corbino Shipley.
Our translator and expert on Sicilian culture and history is Eleonora Formica.  I was watching the CBS News- On the Road show yesterday and they told a Halloween story about Concetto Formica.
The video is here at the 9:40 time mark: Watch CBS News Specials Season 2022 Episode 1014: On the Road with Steve Hartman: Halloween - Full show on CBS
The video segment gave his name as Cancetto Farmica. I used that spelling to find the FindaGrave Memorial here: https://www.findagrave.com/memorial/15775271/cancetto-farmica
I was able to find quite a lot of information about Concetto Formica and I edited his FindaGrave memorial to include the rest of the story. His name was spelled wrong on his grave marker. He was born in Sortino which is a town near Lentini and Carlentini.  The story definitely has a Halloween theme to it, but it will be up to you to decide if it is funny or horrifying.
One of the travelers that went to Carlentini in August was Meg Nanfito Jones.  Meg asked me to help her determine the exact relationship of some of the Nanfito relatives that she met there. Her cousin sent her some grave photos that I added to our Carlentini FindaGrave page: Cimitero di Carlentini in Carlentini, Sicilia - Find a Grave Cemetery The photos have not yet been transcribed if you want to volunteer.
I posted a request in Italian on the Sei di Carlentini Facebook group asking for cemetery pictures but have received no responses to that request.  If anyone has any ideas how to recruit some FindaGrave volunteers in Sicily, please let me know.
I received a request from Pat Todero asking for help with his Todero and Ferrazo grandparents.  Here are the images that I sent him: 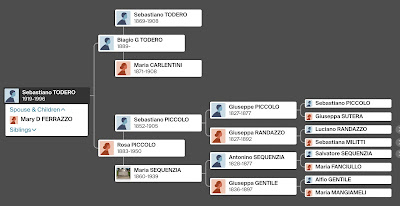 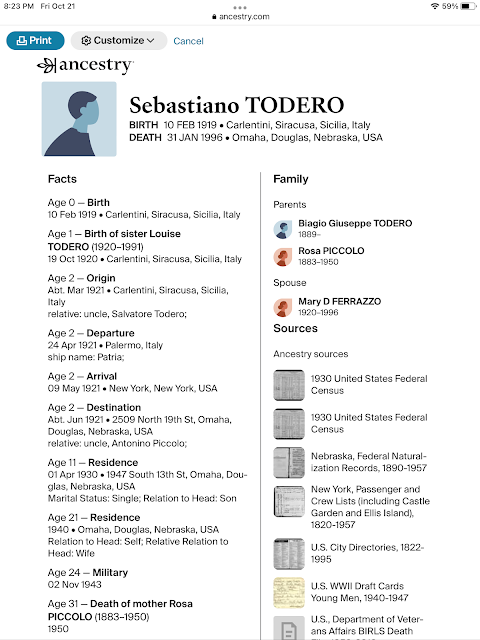 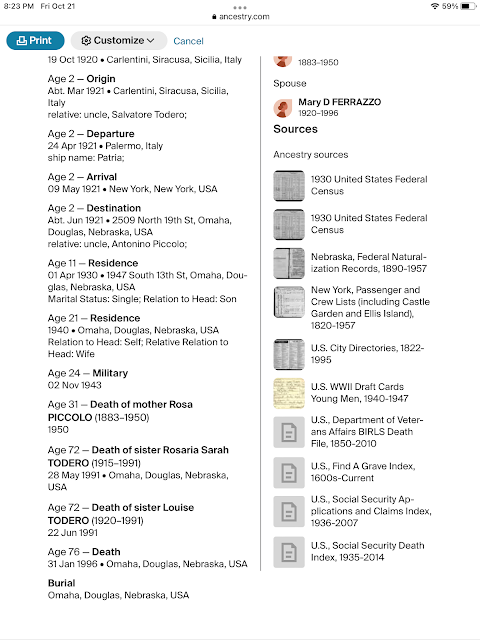 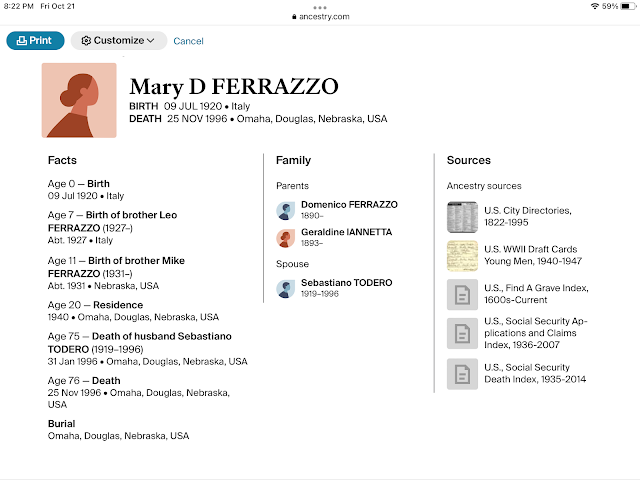 If you have anything that you would like me to publish on this blog or if you have any corrections or additions to this post, please let me know by contacting me by using the contact box in the right-hand column or post a comment below.
All the best and Tanti Auguri,
Nick Cimino
Posted by Nick Cimino at 9:14 AM