I was delighted to learn that my Coffman and Clark research is being substantiated by DNA test results.  DNA is useful genealogical evidence that can enhance your paper records.  I received a promotional message from Ancestry.com stating that "We found new discoveries for Joan Ashley."

I am glad that I was able to have my maternal Aunt Joan tested to enable this discovery. Here is the shared ancestor chart that was provided by AncestryDNA. 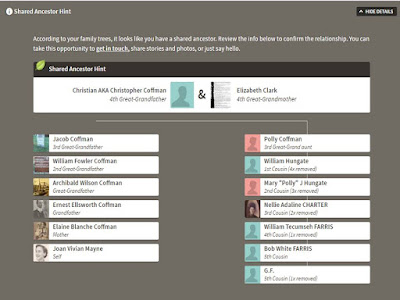 A helpful tool provided by Ancestry.com is the ability to see a list of "Shared Matches."  This helps to narrow down to the specific ancestors that we share in common. 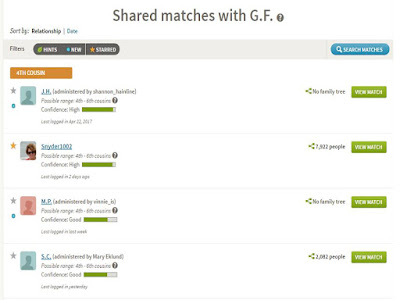 Further examination of the DNA tests that have trees attached, appears to confirm the Coffman and Clark connection. 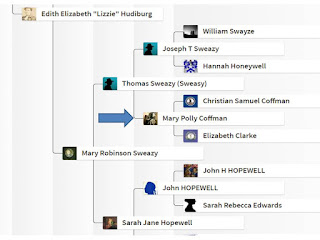 You will notice that both of these DNA connections have Mary Coffman who is also known as Polly or Molly in their family trees.  Polly Coffman as we will call her from now on was the daughter of Christian Coffman and Elizabeth Clark(e).

Any time you collect information from another family tree, you must conduct an analytical process to verify the information contained in that tree.  You need to look at the sources attached and then determine what records might contain more information about the person(s) in the tree.  Using Polly Coffman as an example, I will show you my process of analysis for my fifth great aunt, who is a sister of my focus ancestor, Jacob Coffman.

It appears that there is some conflicting information about Polly Coffman from a variety of sources:

There appears to be several compiled sources which include information on Polly Coffman which provide widely ranging vital dates:

Let's look for some original records with original images to see exactly what those records might say about Polly Coffman.

The first primary record that we have of Polly Coffman is the following:

Her husband, John Hungate was apparently a man of some note in Mercer and Washington County, Kentucky as he is often referred to as Col. John Hungate.  She married John Hungate and they had eight children together. John was a paymaster in the War of 1812 for the 5th Regiment of Kentucky Mounted Volunteer Militia from August 25, 1813 to November 9, 1813 when he died in service.

These facts are supported by an application for a military headstone as follows: 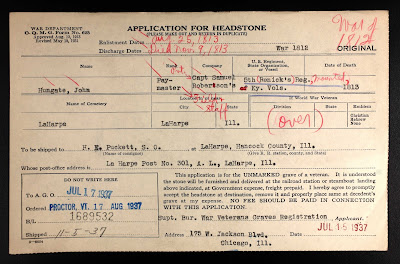 Apparently, this marker was placed in the LaHarpe, Illinois cemetery by a American Legion Post No. 301 even though John Hungate is known to have died in Kentucky in 1813 while in military service.

Now Polly Coffman is known as the widow, Mary Hungate. She married Joseph T Sweazy, a widower on 15 March 1816 and they had three children together.

The census records of 1820, 1830 and 1840 provide some of the few pieces of evidence about Polly Coffman after her marriage to Joseph Sweazy;

The census records appear to support that Polly Coffman was born closer to 1774.

By 1850 Mary "Polly" Coffman Hungate Sweazy is not in the household of Joseph Sweazy and he is now married to a much younger woman.  This is substantiated by a marriage record for Joseph Sweazy to Mary F. Hughes August 12, 1850 in Nelson County, Kentucky.

There are two possible scenarios for what happened to Polly Coffman:

What records might exist that might help us to answer this question?
If you have any ideas to add to this list, I would be most appreciative.

DNA matches have certainly given me a lot more encouragement to pursue all of the descendants of Christian Coffman and Elizabeth Clarke for more information about the Coffmans and the Hungates.