The Other Jacob Coffman

Do you ever find yourself going down a rabbit trail in search of your ancestors?  It happens to me with regularity. You get excited thinking that you may have found another ancestor only to realize that you have been tracing someone else's ancestor.  With so many people with the same names in the same localities, this is bound to happen to every genealogist at some point in their research.

Another object lesson in the research below is that the boundaries of counties were constantly changing in Kentucky before it became a state in 1792 and for several decades after.

While exploring some of the records that I recently found in Mercer County, Kentucky, it happened to me.  The Jacob Coffman that I found in the early Mercer County records appears to have died before 1793 as described in the road survey below.  I hate to see all of this research go to waste, so I post it here in hopes that it will help others  to avoid making the same detour and also to help the descendants of that other Jacob Coffman that we know from Anderson County history that died in 1792. 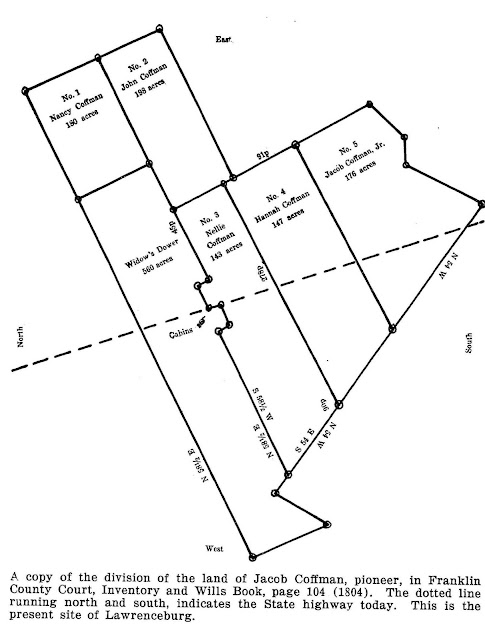 Division of the Lands of Jacob Coffman
Dec 1804
Lawrenceburg, Franklin, Kentucky, USA [Lawrenceburg is now the county seat of Anderson County, Kentucky and was previous to 1794 in Mercer County.]

The map shows the division of the estate of Jacob Coffman among his wife and five children. The map accompanies the probate court record in Franklin County. The land shown is the center of present-day Lawrenceburg, Kentucky.

SOURCE: gmoore70 originally shared this to Ancestry.com on 05 Sep 2010

The following report describes the records that I found on the Jacob Coffman that died in 1792.

TRANSCRIPTION: p. 473, On the petition of sundry inhabitants, ordered that JOHN ARNOLD, ROBERT ARMSTRONG, JACOB COFFMAN, BENJAMIN ARNOLD and JAMES McGUIRE, or any three of them, view the best way for a road from KIRKHAM’s Ferry on the Kentucky River to the road leading from Danville to Louisville and to Drennon’s Lick, also the way proposed for a road to lead from the place where HENRY MILLER proposes to have a ferry, into the above mentioned roads and report.

Google Books gives us a preview of a book entitled, History and Families, Anderson County, Kentucky
Turner Publishing Company, 1991 - History - 180 pages.
On page 7 of this book we find the following reference to Lillard’s  Cove Spring:

In 1873 [sic should be 1773], James, Robert and George McAfee led a party out of Virginia to explore and survey lands in Kentucky.  In their exploration they came upon the spring at the head of Gilbert's Creek.  They referred to it as either Cove Spring or Cave Spring, later called Lillard's Spring from the pioneer Thomas Lillard, and presently called McCall's Spring. The spring is located in [sic should be on] US 127 about five miles south of Lawrenceburg.

During the 1790's Thomas Lillard built his home, which came to be known as "Spring Hill... was located immediately east of a continuously flowing spring originally named the Cave or Cove Spring by the McAfee brothers, also pioneer settlers ...

JACOB COFFMAN, FIRST ANDERSON COUNTY PIONEER"Jacob Coffman was one of the first, it not the first, to build his cabin or fort, in what is now Anderson county. His fort, or strong cabin (It was not one of the large stations or forts), stood on the corner lot made by what is now Woodford and Main streets, the lot now (1928) occupied by the Presbyterian church. This cabin was put up between February 3, 1780 and June 23, 1780, the time he made his 1,000 acre entry, the second entry using the term, "adjoining his settlement and around the same." Here Coffman lived from 1780 until his death by Indians in 1792."