Was Jacob Coffman a Mad Hatter?


In honor of genealogical transcribers everywhere I have assembled this compilation entitled:

THE HEIRS OF CHRISTOPHER COFFMAN IN MERCER COUNTY KENTUCKY RECORDS

extracted from:
Mercer County Court Order Books transcribed and published by Michael L. Cook, C.G. of Evansville, Indiana in 1987 in a book entitled "Mercer County Kentucky Records, Volume 1." Web links to the original records added by Nick Cimino of League City, Texas in April and May 2017.
The focus of these selected records are on the family of Christian Kauffman AKA Christopher Coffman, his wife Elizabeth Clark and their three sons, Jacob, Isaac and Christian AKA Christopher.

The death of Christian Kauffman AKA Christopher Coffman occurred prior to the date that his widow gave consent to marry.  We have not yet been able to find a more definitive date of his death. He may have been one of the early "Low Dutch" settlers that were encouraged to settle near present day Harrodsburg by James Harrod. SOURCE: http://www.jamesharrodtrust.org/james-harrod.html

Elizabeth Clarke Coffman, the widow of Christian Kauffman gave her consent to marry William Veach on 10 June 1787 in Mercer County, Kentucky. Since his widow was married in Mercer County, the presumption would be that he died within the boundaries of that county as they existed in the last half of the decade of 1780. However, if he died prior to the formal creation of Mercer County on 17 October 1785, it is possible that some records related to his death might be found in Lincoln County which was the predecessor to Mercer.


This is to certify that you have my approbation in granting a license to Mr. Wm. Veitch the bearer hereof to Marry me. Given under my hand this 10th day of June 1787 signed Elizabeth Coffman

[No mark so she was apparently able to write her signature.]

Seven years after the marriage of the widow, Elizabeth Coffman to William Veach, she binds out her sons in apprenticeship records found in the Mercer County Court Order Books.


Ordered that THOMAS ALLIN, Clerk of the Court, with consent of the widow, bind JACOB COFFMAN, orphan of CHRISTOPHER COFFMAN, Deceased, to DAVID SUTTON, to learn the trade of a hatter as the law directs.


By conducting a web search, I found the following about "Hatter David Sutton Kentucky":


"TWENTY FIVE CENTS REWARD. Runaway from the subscriber, an apprentice boy, to the Hatter’s trade, named JACOB COFFMAN, about fifteen years old. Whoever delivers him to his master, near the mouth of Dick’s river, shall have the above reward, but no other charges paid.  DAVID SUTTON." 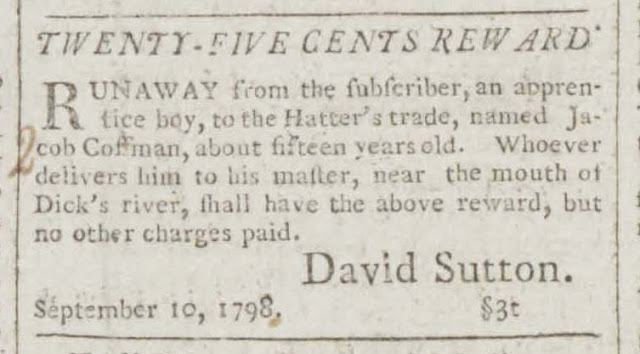 I wondered why Jacob Coffman never followed the hatter trade and this runaway notice explains it. Again we give a big shout out to volunteer transcribers that contribute to RootsWeb and so many other websites.

The "mouth of Dick's river" is mentioned in several online sources:


Mouth of Dix (M-G) (RM 118.3)
The Dix River (originally called 'Dick’s River' after a Cherokee chief) is the location of Lake Herrington built in 1923-35 by the predecessor of Kentucky Utilities, Inc.  Because the Dix River flows through a narrow canyon, it was the site of several mills using this water power prior to the Dix Dam.
John Curd, a Revolutionary War major, acquired a large tract of land near this point, as well as 16 acres in Jessamine County, established a warehouse, and operated a ferry  between the Mouth of Dix and Jessamine County beginning in 1786 under a license from Virginia.
This Act of the Virginia Legislature also established the Town of New Market on twenty acres at this point.  In October 1788 the ware-house became a reality with James Hord, Edmund Mundy, and Bernard [sic]acting as official Inspectors of Tobacco.  The County Court of Mercer County was kept busy surveying potential new roads into the site from various locations.  By any standards, this was a tough job.
This warehouse was one of the inspection stations approved by James Wilkinson for tobacco shipped by flatboat to New Orleans on his second voyage.

SOURCE: http://www.jessamineco.com/river/guidebook2.htm  This site also includes a map of the marker location. 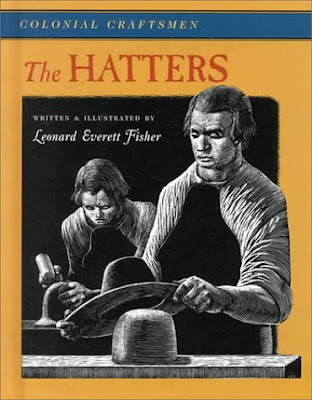 More on David Sutton:
The following reference to David Sutton was found in Kentucky Ancestors V42-4, 2007
excerpted from the The Life and Times of Robert B. McAfee, on page 199,  Recollections of the year 1793:


"My Cousin Samuel Walker Kerr was about this time put to the Trade of a Hatter in Harrodsburgh to Mr. David Sutton, very much against his inclination. My Father thought it his duty to give him a trade as he had no property to support himself. He went with as heavy a heart as I did to board from home and it was unfortunate that he did so as he had no capital to begin with. He, however, attempted to follow it but never succeeded at it and finally it was abandoned as his heart was never in the matter. This event always prejudiced my mind (and experience justifies the opinion) never to put a boy to any Trade or business which he does not freely select himself, as nine times out of ten it will turn out a failure. Almost every person has a genius for some kind of business if permitted to follow it, you cannot force nature or give boys inclination which they do not possess, and if any person does not possess talents to make a fortune, they would not keep it if made to their hand. If Parents or Guardians would oftener consult the natural temperament of their children and wards, they would save many heartaches & disappointments."


Clearly, Jacob Coffman was not inclined toward the trade of a hatter as evidenced by the fact that he had run away from David Sutton. The period of his apprenticeship lasted from May 1794 to September 1798 which is four years and four months.  He was probably "mad" that he had wasted four years of his life but we do not know if he was exposed to mercury poisoning long enough to contract the "mad hatter disease."

SOURCE: Some Early Industries of Mercer County read by Mary A. Stephenson before Harrodsburg Historical Society, March 6, 1914 and published in Register of Kentucky State Historical Society, Vol. 13, No. 38 (MAY, 1915), pp. 43,45-52 [PDF copy downloaded from jstor.org available upon request]

The book of early court records by Michael L. Cook has many more Coffman treasures.  I insert a few of the images that I snapped to tantalize you and encourage you to find a copy of this wonderful book of abstracts for yourself. 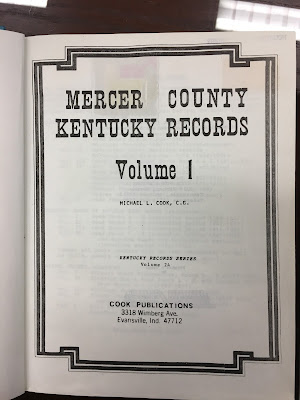 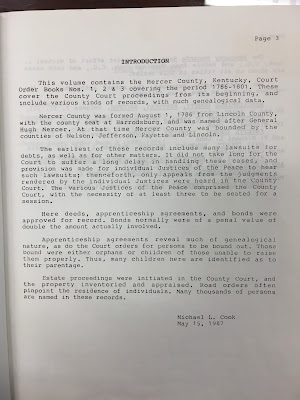 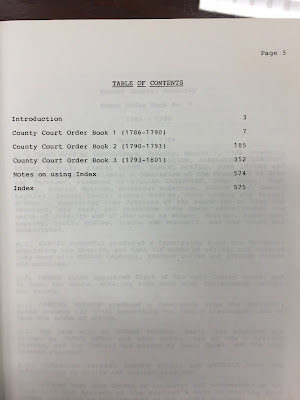 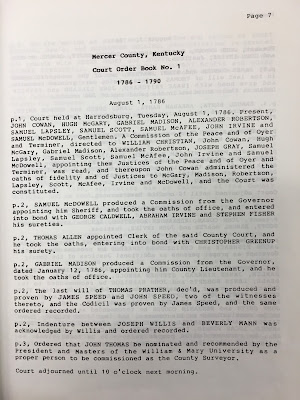 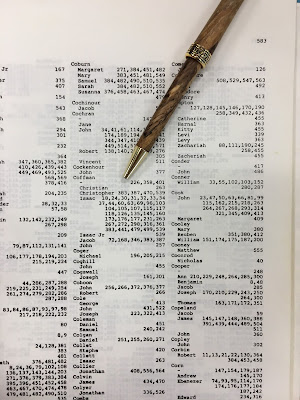 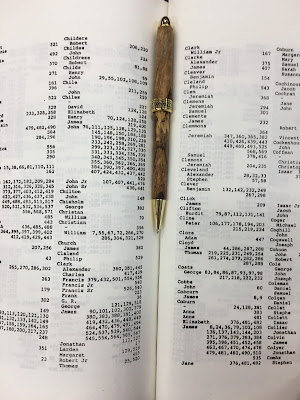 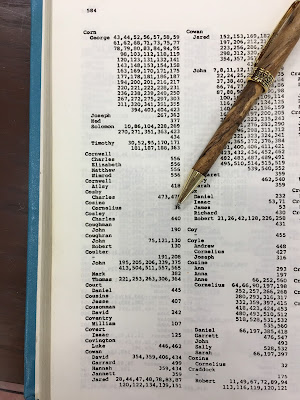 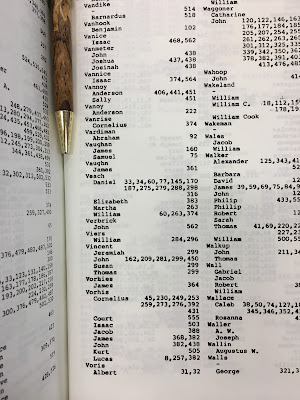